In a first for Australia, the Live Music Office has harnessed the power of digital technology to create a national Live Music Map.

A tool for artists and the broader live music industry, the map highlights everything needed to tour the country, from venues to gear hire, to community radio and booking agents.

Aiming to help bring the live music sector closer together, the Live Music Map plots businesses all over Australia including: 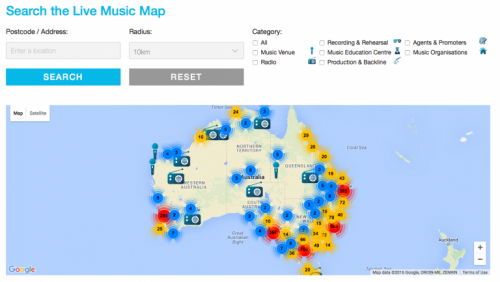 A statement from the Live Music Office explained “live performance provides a major part of an artists income (and) with the Live Music Map, we are removing barriers and connecting various components of the live music sector to help artists tour the country with ease.

“We hope it will create more opportunities for performers and bolster the great live music venues that exist across Australia.

“The Live Music Map has the functionality for businesses to upload the own details and we believe this will be a welcome option across the whole of the live sector.”

The Live Music Map was developed in association with the South Australian Government through the Music Development Office (MDO) and the Australian Music Radio Airplay Project (Amrap).

“The Live Music Map will ensure the ongoing success of this industry by providing bands and musicians with the right tools to showcase their creative ideas, and develop their business capabilities to reach new audiences.”

Click here to view the map and upload your own business details.