The Redback, one of Australia’s legendary mountain bike stage races will have a new format and schedule when it returns to Alice Springs in 2015.

The Redback provides four days and six stages of some of the most inspiring mountain biking Australia has to offer, racing along the jaw-dropping trails around Alice Springs, Northern Territory.

Alice Springs is surrounded by kilometre after kilometre of hand built single track made for mountain bikes by mountain bikers and The Redback makes full use of these quality trails that everyone enjoys so much.

The six stages of The Redback are extremely varied, offering up stunning 40 to 50 kilometre cross country stages through to a 22 kilometre night race and a 300 metre climb up Alice Spring’s Anzac Hill.

Competitors come from across Australia and increasingly overseas to compete in this iconic event with over 200 riders expected to participate in The Redback event in August 2015.

This year’s winner Ben Mather from Tasmania raves about the event and encourages more people to attend, stating “those who haven’t done the event for a while or are yet to do it are definitely missing out.

“The locals have put a lot of work into making new single track and improving the existing ones and it’s a really good event.”

Rapid Ascent Race Director Sam Maffett explains “the award-winning event is now in its eighth year and we’re keen to spice it up a bit.

“We’ve condensed the event format to four days, moved it to August, updated stages to include more of the region’s great trails and are now offering individual stage entries as well a total six-stage package. 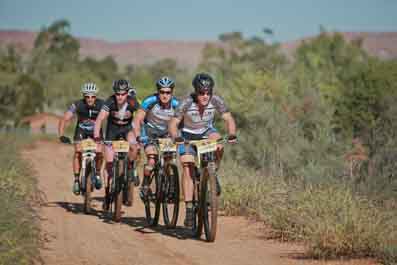 The new event format still allows plenty of time for riders to socialise after racing and to explore Alice Springs. The social side is one of the identifying factors of the event and is extremely valued by competitors who often combine it with an extended holiday to the region.

2014 female winner Jo Bennett from Western Australia adds “most of all, the camaraderie between all the riders over the week makes this event what it is, and brings us back.

“If you have thought about contending this event, you should. It is achievable for all riders no matter your ability. And once you have arrived in Alice everything is only 5 minutes away by bike!

Ingkerreke Commercial, an Aboriginal owned, Alice Springs based all trades construction company, will again be the presenting sponsor of the event.

Ingkerreke Commercial Chief Executive Scott McConnell concludes “this race is of enormous benefit to the people of Alice Springs and Ingkerreke is all about supporting our local community.

Ingkerreke means ‘All together’ and reflects the corporation’s values as portrayed in the tag line: ‘Together we are stronger’.

The Redback will be held from Thursday 20th to Sunday 23rd August 2015, with the event based from the Chifley Alice Springs Resort.

Combine the 2015 improvements with the easy race logistics, friendly atmosphere and quality trails of the old race and this is one incredible mountain bike event.

A video on The Redback can be viewed on YouTube at: http://youtu.be/LLEwdlPXA0Q

For more information on The Redback 2015 go to www.theredback.com.au