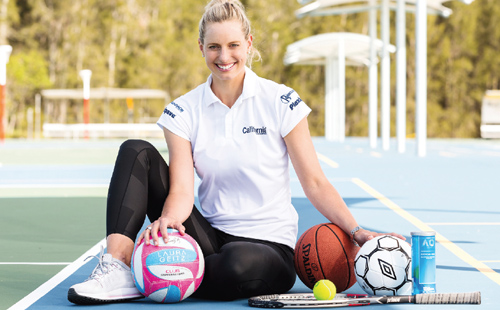 CSS is the global leader in acrylic sports surface systems for indoor and outdoor netball, tennis, basketball and portable courts, supplying the most popular netball and tennis brands in the world, Plexipave and Rebound Ace in their product range.

Partnering with CSS, Geitz, who recently confirmed her intention to return to competition next year, explained “as athletes we talk so much about injury prevention and in my eyes it needs to start from a very young age.

“My aim is to make sure the many thousands of netball participants in Australia have the opportunity to enjoy the game on the most comfortable of surfaces, and CSS has fantastic long-lasting options available.”

“In New Zealand for example, netball continues to prioritise investing in our cushioned courts. Our courts are chosen for their quality and longevity, but most importantly they are chosen to benefit clubs and their participants.”

Geitz was drawn to the high standards, profile and credibility behind CSS’s work, adding “there is no doubting the consistency and regard for California Sports Surfaces, both globally and in Australia. I am impressed at the breadth and scale of their work and their custom designed products for netball.”

CSS partners with experienced applicators and court builders in Australia and worldwide and is fully trained and accredited for the supply and installation of their products.

Confirming his business’s commitment to sport in Australia, Lock concluded “force reducing cushioned courts help reduce injuries and contribute to club sustainability by prolonging an individual’s participation in the game.

“We are excited to be working in partnership with one of Australia’s most decorated netballers”. Geitz has signed on for a two year term to work with CSS.

Click here to contact California Sports Surfaces in Australia via their entry in the Australasian Leisure Management Supplier Directory.