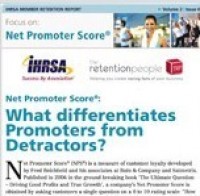 Conducted in partnership with The Retention People (TRP), the report is based on a survey of more than 10,000 fitness club members in the UK, examining how member demographics, duration, attendance, and activity participation vary between 'promoters' and 'detractors'.

Introducing the report, Jay Ablondi, Executive Vice President of Global Products at the International Health, Racquet & Sportsclub Association (IHRSA) explains "the most recent edition of the IHRSA Member Retention Report will help club operators better distinguish the characteristics of loyal members, who may endorse their club to family and friends, from those who may be more likely to badmouth their business.

“Although longer tenure is historically indicative of member loyalty, the report shows that recently joined members are most likely to be promoters.”

The report suggests leveraging the power of staff interactions and group activities with members of all ages, as social activities, including group exercise, typically lead to a higher rate of promoters.

TRP North America Director Phil Bonomo adds that "understanding the mindset of promoters is critical to improving overall member satisfaction, which has a direct impact on improving retention.

“TRP will be studying promoters in depth during an upcoming, first of its kind, North American health club member ‘longitudinal study.’

"This study will track active club members over a multi-year period and provide meaningful insight into what makes a promoter, and how clubs create a culture that yields more promoters than detractors.”

IHRSA is a not-for-profit trade association representing health and fitness facilities, gyms, spas, sports clubs, and suppliers worldwide. IHRSA and its members are dedicated to making the world healthier through regular exercise and fitness promotion.

TRP are leading researchers in fitness and health club member retention, using research to drive the development of effective retention solutions that include digital products, retention processes and training packages that improve the member experience.