The City of Sydney is installing low-carbon cogeneration in the Ian Thorpe Aquatic Centre to produce clean, locally produced energy for the indoor heated pool, café and fitness centre.

The cogeneration unit is part of the City’s trigeneration program, and will provide power and heating at the centre, reducing greenhouse gas emissions by more than 500 tonnes a year.

Many NSW councils already use cogeneration/trigeneration at their pools, including Willoughby, Wagga Wagga, North Sydney and Hornsby. It is also installed at the Sydney Olympic Park Aquatic Centre.

Lord Mayor Clover Moore said the City had made a long-term commitment to cut carbon pollution and locally produced energy would make a significant contribution to its emissions reduction target of 70% by 2030.

She explained “for the past 13 months straight we’ve set new global temperature records every month, we’ve had the monster storm along the East Coast and the shocking new evidence of bleaching coral on the Great Barrier Reef.

“With cities responsible for more than 70% of carbon emissions, it’s action in cities that gives us the greatest opportunity for action.

“We’ve already cut emissions in our own operations by 27%. Under our new environmental action plan we’re committing to reducing emissions by 44% by 2021 and cogeneration at Ian Thorpe aquatic centre will play a significant role in reaching that target.”

The cost of carbon abatement per tonne using trigeneration at Ian Thorpe Aquatic Centre is lower than Greenpower, and the system also provides infrastructure that improves the building’s overall energy efficiency. 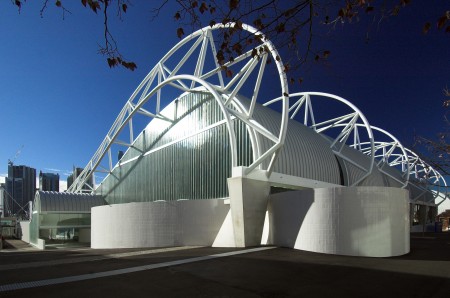 Locally-produced electricity reduces carbon pollution, improves energy efficiency and reduces high network charges from using the inefficient poles and wires that bring electricity from the Hunter Valley and beyond.

Cogeneration and trigeneration plants use natural or renewable gases to produce electricity. The heat by-product from the process that is wasted at centralised power station can be captured and used for air conditioning, space heating and hot water services – making the facilities more than twice as efficient as coal-fired power plants.

A trigeneration plant has recently been installed on the roof of Sydney Town Hall House to power the town hall and its office buildings and is currently in the testing phase. Together with the solar panels that have already been install on the Town Hall, this will provide energy for hundreds of lights, printers and computers as well as air conditioning and space heating and charging for the City’s electric vehicle fleet.

The City has already retrofitted 45 of its properties to reduce electricity and water use, generating operational savings of more than $1 million a year.

The City is working with businesses to reduce emissions and make significant savings to balance sheets through programs, including Smart Green Business, CitySwitch and the Better Buildings Partnership.

The Better Buildings Partnership includes the owners of more than half the commercial office space in the city centre and was established by the City of Sydney. By improving the energy efficiency of their buildings, the partnership has avoided more than 145,000 tonnes of carbon emissions in the last year as well as reduced costs by more than $30 million.