Kings Park facility to entice children back outside 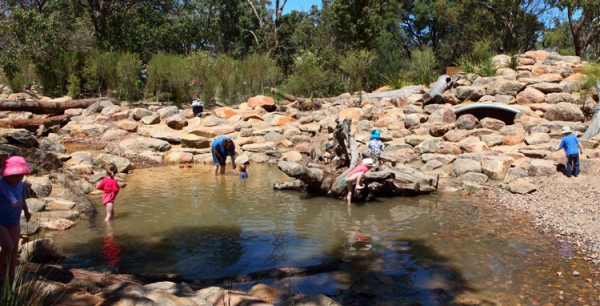 The revolutionary Rio Tinto Naturescape Kings Park has been designed to connect children with nature and learn to appreciate the unique Western Australian environment has opened at Kings Park.

The $8.5million attraction has been funded by Rio Tinto; the WA Water Corporation; the Friends of Kings Park with the support of Lotterywest; and the Federal Government's Perth Solar City program.

Rio Tinto Naturescape Kings Park is set over 60,000 metres2 in the park's arboretum area and offers children the chance to build cubbies, wade through creeks, climb trees and play hide and seek.

Opening the new environmental discovery facility, Western Australian Premier Colin Barnett said it offered children the chance to 'get their hands dirty' in a nature-based environment, stating "Rio Tinto Naturescape Kings Park is a place where children can explore and experience the wonder of nature.

"This in turn helps them learn about the natural environment and become more caring and effective environmental custodians in the future.

"I'd like to thank the Botanic Gardens and Parks Authority for their vision in bringing this ambitious project to life with capital raised by business and government sectors."

Premier Barnett said the facility addressed health professionals' advice that outdoor experiences in nature were vital for a child's physical, mental, emotional and social development, adding "this initiative is a great antidote to community concerns about the need for accessible opportunities for children to experience nature first-hand in their increasingly urbanised and structured lives."

Western Australian Environment Minister Bill Marmion said the Rio Tinto Naturescape Kings Park project was the first of its kind in Australasia and is already providing inspiration to other like-minded government and non-government agencies in Australia and New Zealand.

Minister Marmion explained "this innovative facility features a range of zones, each with a distinct environmental theme including a running creek and cubby building opportunities within the Lotterywest Bushbase, the Water Corporation Wetland, conservation areas, ropes and rocks to climb, elevated lookouts, ground hides, plus a separate area for Kings Park's school environmental education programs."