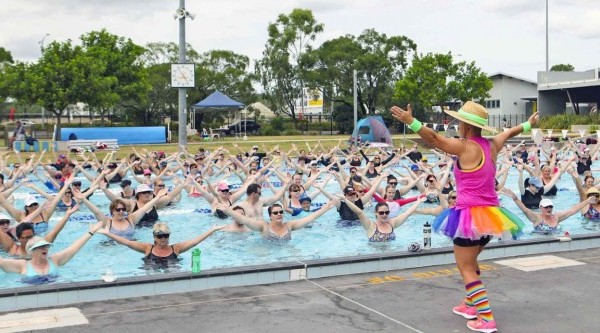 Commenting on the attempt IHF Events Manager Ashton Greaves stated “aaqua fitness is consistently the most popular class that we offer as part of the Fit4Life program - it’s perfect for a wide range of ages, it’s low impact and it’s easily accessible to anyone and everyone.

“The world record attempt is about building healthy habits. It’s the sort of event that can inspire people to make changes in their lives and take steps to improve their physical and mental well-being through something as simple as exercise.

“We need plenty of people to turn out and I know Ipswich won’t let us down, we’re an active community and we love to have fun and get out and about so this record is perfect for us.”

Bell added “our flagship event, Park2Park, is growing in stature not just in Ipswich but throughout the running community.

“It’s now in its 14th year and people will notice some significant changes in 2018 with the focus on a big stadium finish, new corporate supporters and a great recovery area.

“Looking beyond Park2Park, Ride On will celebrate all things cycling from 15th to 22nd April and will include the annual Ipswich 100 along with events at the BMX club, the new criterium facility at Briggs Road and the Brisbane Valley Rail Trail.

“Above all, what we’re trying to do through these events and the Fit4Life program is encourage Ipswich people to make an increased commitment to their health and well-being.”

Aquafitness: Bundamba Swim Centre, Wednesday (6pm) and Friday (9.30am) for $5 per person.

Walking: Ipswich Riverlink Shopping Centre, Tuesday (7am) and Thursday (7am), Redbank Plaza, Monday (7am) and Friday (7am) for $2 per person.

Mums and bubs: Queens Park Ipswich Nature Centre, Thursday (8.30am) for $5 per person.

Click here for more information on the Fit4Life program.