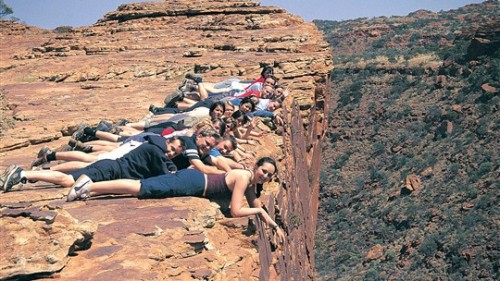 Tour companies encouraged clients to climb down a ledge at Kings Canyon in the Northern Territory where a 23-year-old tourist fell and died last year, a coroner has heard.

British tourist Zoe Woolmer was on a guided tour with The Rock Tour Company in June 2014 when she and a number of other tourists climbed down onto a ledge at Kings Canyon for a photo opportunity, following a demonstration by the tour guide.

The cliff edge, included as part of the tour itinerary, where the Briton fell had been described as a ‘lookout, and had for a long time been used as a location for ‘fun’ photos whereby the tourist appeared to be clinging from the cliff.

However, signs at the site advised against approaching the cliff edge.

The opening day of the inquest heard Woolmer's tour guide, Rebecca Gethen, was only six weeks into the job when the death occurred and on her fourth solo tour.

Gethen told the coroner “I didn't (see her fall) directly at the time but I distinctly remember her pink and white top going in and out of view.

"She wasn't saying any words but she was groaning and moaning. She was looking up at me... I said, 'help is on the way darling. Don't worry, I won't leave you.'"

Before leading a solo tour, Gethren had trained with an experienced guide who showed her how to take visitors one metre from the canyon's edge.

Counsel assisting the coroner, Kelvin Currie, asked Gethren why she had gone along with the company's itinerary despite signposted warnings at the canyon itself. 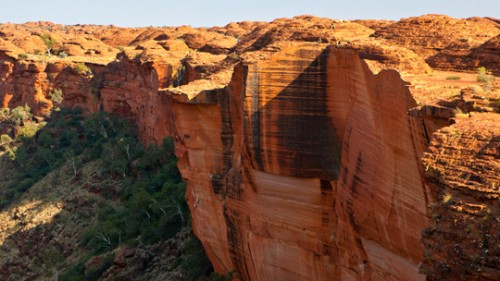 "I just wanted to get everything right that was in the itinerary and I wanted to do a good job."

Watarrka National Park Head Ranger Michael Rawnsley described scrambling through thickets and over boulders to get to Woolmer.

He advised that he stayed with her overnight until her body could be recovered.

Currie told the inquest there had previously been a death at the same ledge in 1996 advising that there was a "cliff safety" sign warning people, among other things, to stay away from the cliff.

He also drew the inquest's attention to correspondence between The Rock Tour Company and the Parks and Wildlife Commission NT, who had told all tour companies to stay two metres from the canyon's edge at all times.

In 2014, there were many examples of these fun photos at the ledge on the company's Facebook page.

Currie said one witness had stated that Woolmer got down on the ledge as instructed, sitting on the edge and then rolling onto her stomach.

the ledge. However her right foot didn't reach the ledge at the moment she anticipated.

Woolmer fell backwards from the ledge, rolled onto a rocky protrusion below the ledge before falling about 15 metres or more onto the rocks below.

She died at the scene after CPR was performed for more than 20 minutes.

Currie said the issue was whether training for staff by the tour operator The Rock Tour Company was adequate, as well as the effectiveness of the permit system for tour operators.

Currie added “the way those (permit) requirements were communicated to the guides by the operators and the manner of that communication is clearly very relevant.”

Zoe Woolmer's family have travelled from England to attend the inquest, which is set down for three days.