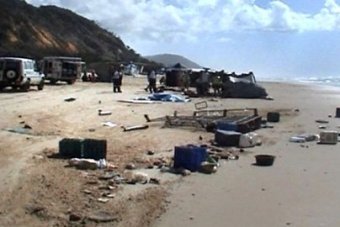 The Queensland coroner has asked prosecutors to consider criminal charges over a four-wheel drive death on Fraser Island.

Coroner Michael Barnes has handed down his findings into the deaths of three young foreign tourists in two separate 4WD accidents on Fraser Island in 2009.

Among his five findings, Coroner Barnes has recommended the speed limit be lowered to 80km/h from 100km/h, and that there be an age limit of 25 or over for 4WD hirers.

Coroner Barnes found speed was a factor in both crashes.

In the first incident, Dell' Angelo and Davy had been travelling as part of a group of young international backpackers on a camping tour of the island.

The group was on its second day of the tour when the crash occurred.

The inquest was told the driver of the 4WD, James May - who was 20 at the time - was travelling at a speed estimated between 70 and 80km/h.

Passengers on board the vehicle told the inquest Mr May "swerved sharply" to avoid hitting a wave, causing it to roll.

Dell' Angelo and Davy died at the scene.

Five others were seriously injured and required hospital treatment.

The crash was so severe, the wreckage was strewn over 50 metres, all glass windows were smashed and the bonnet and roof rack was torn off the vehicle.

Mr Barnes found that "inexperience" and ignorance of the conditions led to the crash.

However, the driver in the second crash, Takashi Nukutou, may face criminal charges over the death of Takeshi Sakai in December.

Coroner Barnes found Nukutou was driving dangerously when he lost control of the 4WD.

He has referred the matter to the Director of Public Prosecutions.

The inquest heard several witness accounts that in the lead-up to the crash the vehicle may have been travelling up to 120km/h.

Just before the crash it was reported the vehicle had swerved to avoid hitting waves causing the 4WD to somersault.

Sakai was sitting alongside Nukutou in the front passenger seat and was thrown from the vehicle.

He was not wearing a seatbelt and died at the scene with injuries including a broken neck. Nukutou told the inquest he did not remember the speed he was travelling at the time but estimated it to be around 80km/h.

He did admit that at times he may have reached speeds up to 100km/h.

"It's important we do everything we can to improve safety on Fraser Island and educate drivers that beach driving presents very different conditions," the Ministers said in a statement.
AAP