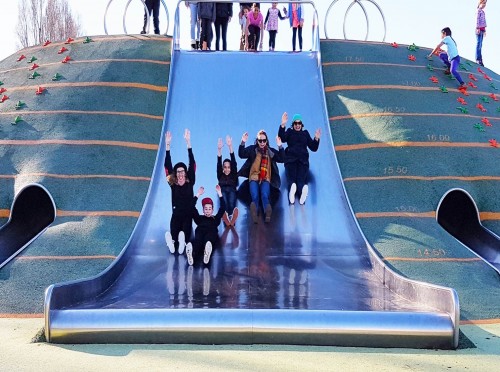 Named the recipient of New Zealand Recreation Association (NZRA) 2016 Outstanding Project award, the Tākaro ā Poi/Margaret Mahy Family Playground in Christchurch was recognised as an innovative playspace that has great engagement with children and has led to a positive economic impact on the post- earthquake CBD.

Part of a larger $20 million development on the banks of Christchurch’s Avon River, the Margaret Mahy playground was erected at a cost of $3 million.

Built in a central location for families to share, the idea to develop the area came out of the Christchurch City Council's Share an Idea campaign after the earthquakes.

The park is made up of four distinct zones – the peninsula zone, forest zone, wetlands zone and plains zone.

The theme of the playground was inspired by the natural environment of the Canterbury Plains and Port Hills and features a unique mix of playground equipment, interactive spaces, gardens, artwork, water features, recreational and picnic areas, visitor parking, and public facilities to be used and enjoyed by children and adults alike.

A favourite feature of the park is the Story Arc, which features tales from children’s author Margaret Mahy – for whom the park is named – as well as Elsie Locke and Ngai Tahu, together with an intricately tiled Nga Whariki Manaaki (welcome mat).

The park also includes a double flying fox, slides and seesaws, while the wetland area includes various spinning objects, and three 10 metre-high towers with swing bridges and tunnels have been erected for the adventurous.

With safety always a factor in playground designs, Rosehill TPV rubber safety surfaces were specified to ensure a softfall surface for those at play.