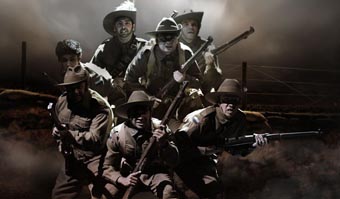 Perth Theatre Trust’s new partnership with the Perth International Arts Festival will see a critically acclaimed production about Indigenous soldiers who served during World War One performed in Western Australia.

The Queensland Theatre Company’s Black Diggers is to be staged at the State Theatre Centre of Western Australia from 3rd to 7th March as part of the 2015 Perth Festival.

Announcing the production, Western Australian Culture and the Arts Minister John Day stated “it is fitting that such a significant Australian production should mark the first collaboration between the Perth Theatre Trust and the Perth International Arts Festival.

“The production tells an extremely important ANZAC story - the largely unknown contribution of hundreds of indigenous soldiers, who signed up to defend their country during (the) First World War, in spite of not being recognised as citizens.

“Black Diggers tells stories of their war experiences, their pride in their contribution, and of the strong friendships that were formed between soldiers in a situation where colour was immaterial.

“It also tells the stories of the treatment they received in the aftermath of the war in a time of very different values to those we share today.

“The commemoration of the centenary of ANZAC is a time to remember the sacrifices of all those who served, and their part in our nation’s history.”

Black Diggers, directed by Wesley Enoch and written by Tom Wright, draws on interviews of the families of soldiers, veterans, academics and extensive research.