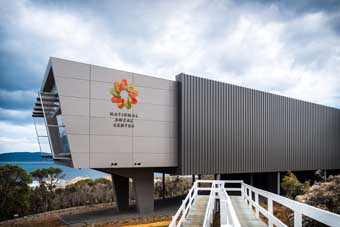 Australian Prime Minister Tony Abbott and New Zealand Prime Minister John Key came together at the weekend to open the National ANZAC Centre, a new museum dedicated to telling the stories of some of hundreds of ANZACS who set sail for the First World War from Albany.

The official opening of the $10.6 million Centre was part of the weekend-long Albany Convoy Commemorative Event held in the West Australian port town to mark the centenary of the first convoy of Australian and New Zealand troops leaving to fight in the War.

Located within the Princess Royal Fortress Military Museum Precinct, the National Anzac Centre is a show piece for the ANZAC Centenary, aiming to provide the opportunity for visitors to experience an emotional connection with the men and women who were involved in World War One, understanding the sacrifice that they, their friends and families, made on behalf of their nation and its allied nations.

The Centre is accessible not only physically, but also virtually via the internet and will highlight the significant role Albany played in the creation of the ANZAC Spirit.

Commemorations held in Albany over the weekend were attended by at least 60,000 people, many with personal connections to the men and women who served in or were part of the First World War.

For more information go to www.anzacalbany.com.au