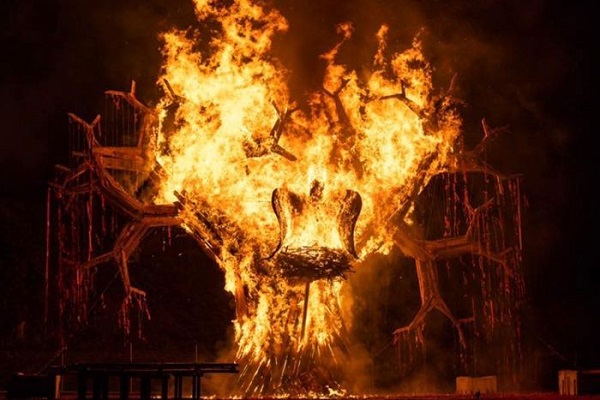 However, Festival Director Leigh Carmichael said he feels the event may have reached capacity in some areas.

With the annual winter festival wrapping up on Sunday night with the traditional burning of the Ogoh-Ogoh sculpture, he told the ABC "I'm not sure we can get much bigger. I think it feels like the town is pretty big.

"We stretched to three weeks this year, which was a bit of a challenge for our team.

65% of tickets this year were purchased by interstate visitors and an early estimate puts mainlander numbers at around 25,000 - a boost noticed by Tasmania's tourism industry.

Heroys advised "we've had reports from Port Arthur that they've seen more interestingly dressed clients in the last couple of weeks than they've seen from the last few years.

"So we know that the visitors from the festival here are getting out to the regions and supporting those regions that were hit hard by the bushfires this year.

"(The event) a gamechanger, we've got a winter peak season now."

Tasmanian Premier Will Hodgman said the festival had proved time and again that it was worth the $10.5 million investment deal.

He stated "it's always been a challenge to get people here in the depths of winter, but since its inception in 2013, Dark Mofo has been a beacon for not only those who want to come and visit our state, but for many Tasmanians — we come out of hibernation at this time of the year and celebrate."

Carmichael said while he was glad to see the tourists flowing in, the festival was ultimately about the Tasmanian community.

He added "I think first and foremost it is a festival for us.

"I'd like to see more Tasmanians buy tickets, but the tourism flow-on is brilliant and it's great to celebrate what it means to be Tasmanian with the visitors.

"It's showcasing the best of what Tasmania is in the coldest and darkest time of the year."

Carmichael said this year's festival had not been without its issues , concluding "Dark Path has had some challenges. I don't think any of us expected 15,000 people to walk that path at night when we promoted it as a four-kilometre walk up through the Domain," he said.

"We may need to look at putting even more effort into that walk … at this stage, we think it was successful enough to continue."

Image: Dark Mofo closed on Sunday night with the traditional burning of the Ogoh-Ogoh sculpture.