With the Eagles and the Hawks set to compete in the AFL Grand Final, an analysis of the clubs’ supporters by Roy Morgan Research shows that Hawthorn has the most fervent fans.

However, numerically West Coast come out on top with 653,000 Australians aged 14 and over supporting the Eagles, compared with 498,000 behind the Hawks.

West Coast’s fan-base is also a bit more gender neutral, with women making up 44% compared with 40% of the Hawks’.

The research shows that only around one in five West Coast fans actually went to a match (21%) compared with more than one in three Hawthorn supporters (35%).

Roy Morgan Research suggest that the team spirit of West Coast fans may perhaps be dimmed because they’re too busy enjoying the good life!, compared with Hawthorn supporters they’re more likely to have a swimming pool (17% vs 13%) or barbecue (74% vs 69%), or to have had an overseas holiday in the past year (27% vs 23%). They donate almost $50 more per year to charity, and spend $16 more going out in an average week (although Hawks supporters spend $10 more on at-home entertainment).

A quick guide to the supporters of 2015 AFL Grand Final Teams: 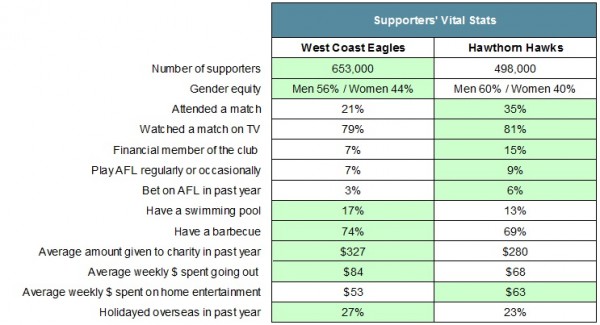 Commenting on the findings, Roy Morgan Research, Industry Communications Director, Norman Morris stated “with Hawthorn now going for its third consecutive Premiership, it’s perhaps not surprising that their supporters seem to be the more fervent fans - more likely to go to games, watch on TV, bet on them, pay club dues or play AFL themselves.

“By comparison, it’s been almost a decade since West Coast played in a Grand Final. It will be interesting to track the change in attendance and viewing rates should the Eagles beat the home-town favourites at the MCG this Saturday.”