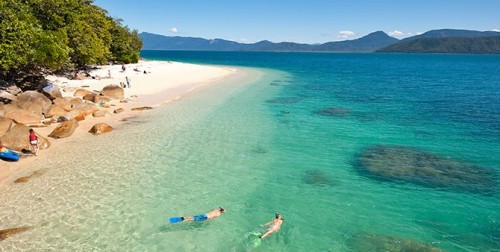 An international study has found that the economic cost of coral bleaching of the Great Barrier Reef would be $37.7 billion.

The Oxford Economics report, which values the reef at $51.4 billion, also found up to 50% of tourists who would normally visit the reef would stay away from Queensland if bleaching was permanent, devastating Queensland's tourism industry.

The study was commissioned by the Great Barrier Reef Foundation to set an economic benchmark for the natural asset.

The Foundation's John Schubert says the figures paint a disturbing picture for tourism and local communities that directly benefit from their proximity to the reef, rReferring to the study as "a wake-up call."

Coral bleaching occurs when rising water temperature, salinity or acidity in seawater affects the corals. It can kill the corals if the conditions continue for a month or more. The threat to the reef from coral bleaching is one of the most popularly recognised effects of climate change.

If greenhouse gas emissions are not reduced globally, the Great Barrier Reef is expected to be one of the first of Australia's World Heritage sites seriously damaged. But Dr Schubert warned that with climate change happening much faster than predicted, Australia must plan to ''adapt'' the reef to save it from some level of damage scientists say is inevitable.

"There needs to be extra emphasis on the adaptation side," said Dr Schubert, who is also the outgoing chairman of the Commonwealth Bank and sits on the board of BHP-Billiton and Qantas. He said the report by Oxford Economics was a conservative assessment of the losses if the reef was damaged by permanent bleaching.

Foundation Managing Director Judy Stewart expects the economic study will set a new standard for valuing the environment stating "I expect that the methodology will be looked at in great detail by other economists looking at other environmental assets elsewhere, as well as how we value coral reefs elsewhere."