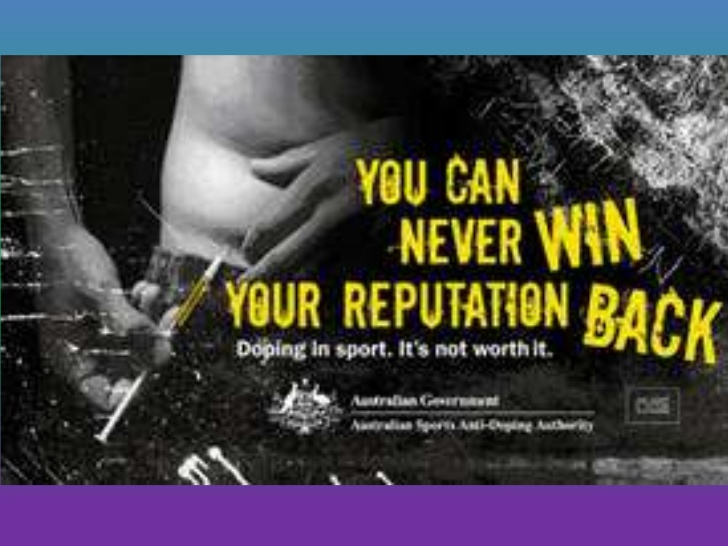 A hard-hitting poster showing an athlete injecting a prohibited substance is at the centre of a new anti-doping awareness campaign has been launched by Minister for Sport, Kate Ellis.

The new campaign by the Australian Sports Anti-Doping Authority (ASADA) targets both up-and-coming and elite athletes with the message 'You can never win your reputation back'.

Minister Ellis explained "this confronting poster sends the important message to athletes that doping is never okay and that your reputation, once lost, is something you can never get back.

"Doping can ruin an athleteâs health but it can be just as damaging for an athleteâs reputation and ultimately has the potential to end careers."

Minister Ellis met with elite athletes who have thrown their support behind the campaign at Parliament House this morning.

Halliday, who has moved into cycling following her rowing career, agreed that the campaign message had to be spread at a grassroots level, stating "I can relate to the pressure young athletes are under while trying to carve out a career in sport.

"This campaign highlights the fact that no matter how good athletes getâno matter how many races they win or goals they scoreâit will all come crashing down if they have cheated through doping."

The Australian Government, through ASADA, aims to develop a sporting culture free from doping in which performance is based on an athlete's talent determination, courage and honesty.

To achieve this the Government works to provide a comprehensive anti-doping program for the Australian sports community, encompassing deterrence, detection and enforcement activities.

ASADA has developed its campaign based on research that shows reputation is a major concern for athletes when contemplating doping.

The 'You can never win your reputation back' campaign will run through June and July and encourages everyone involved in sport to visit the ASADA website and find out more about the risks and repercussions of doping.

Minister Ellis concluded "we want to remind athletes that this risk is real and that doping in sport is simply not worth it."

Schools or local sporting organisations that are interested in ordering posters for display in classrooms and/or change rooms should call ASADA on 1300 027 232.

Any Australian can play their part and stamp out doping by confidentially reporting suspicious doping activity to 1300 027 232.

For more information go to www.asada.gov.au