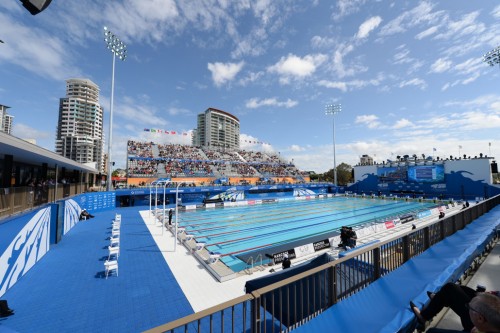 Redeveloped at a cost of $42 million for the 2018 Gold Coast Commonwealth Games, the facility has been widely criticised for its lack of cover for events and spectators, most notably during the 2014 Pan Pacific Championships when poor weather saw athletes, coaches and spectators exposed to the elements.

At the time, US swimming superstar Michael Phelps labelled the conditions “crazy” while Australian champion Emily Seebohm said she felt for spectators who braved the weather and hoped organisers had enough sense to at least put a roof over grandstands for the 2018 Games, stating “hopefully the stands are covered (in 2018)."

With world swimming governing body FINA having shied away from using outdoor pools for major competitions since the 2009 Rome world titles, some fear the venue will be ignored for major events after 2018.

Australian  Head swimming coach Jacco Verhaeren has recently expressed fears that the facility risks being a white elephant without roof, telling the Gold Coast Bulletin “given the significant issues we had during the Pan Pacs, I am sure that if they come back again they would ask for a roof.

“We got away with it last time and our swimmers did well but it is not the way to go on the international stage.

“The worst nightmare of any organisers of a Commonwealth Games and Olympics is there would be no legacy or continued use of the facilities afterwards.”

Gold Coast City Councillors recently voted to have engineers conduct a feasibility study on building a roof while Mayor Tom Tate has confirmed that he would be writing to Queensland Commonwealth Games Minister Stirling Hinchliffe to discuss joint funding for the upgrade.

Estimates suggest that a roof over the entire complex could cost up to $20 million.

Last year it was revealed that the Centre it was losing close to $40,000 a week as a result of using more water and more staff than had been anticipated, including a monthly $5000 bill for an electrical system only needed for the Games.