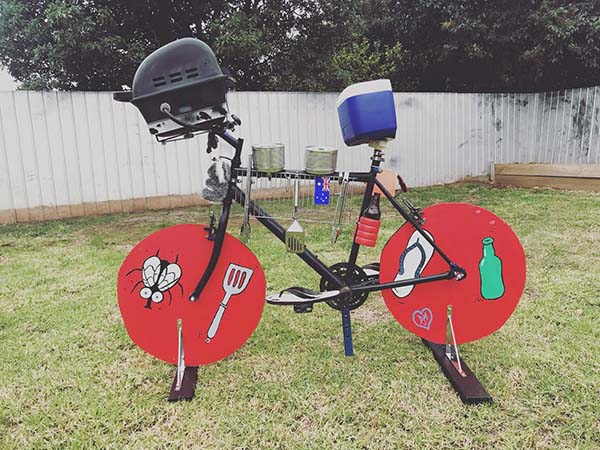 Greater Shepparton City Council is exhibiting ‘Art Bikes’, a temporary art installation in the CBD to coincide with the upcoming BMX Australia National Championships and BMX Supercross World Cup events, to be hosted Greater Shepparton in 2019 and 2020 respectively.

The Art Bikes will be on display during business hours in the CBD from Friday 17th May to Saturday 25th May.

The ‘Bat Bike’ will be the first bike to appear in the Maude Street Mall with the other bikes to follow.

Advising that residents and visitors are invited to come along and check out the bikes, Greater Sheppartonl Mayor Kim O’Keeffe stated "we have so many great upcoming events here in Greater Shepparton, perhaps the most exciting of which are the BMX Australia National Championships and BMX Supercross World Cup.

“The National Championships in particular is only just around the corner between 20th and 25th May this year. They will see more than 3,000 visitors from around Australia converge on Greater Shepparton for an action-packed week.

“With so many people in the region we are encouraging visitors and locals to get into the CBD and see the art bikes and the other many great things we have to offer.”

At the conclusion of the BMX National Championships on 25th May the bikes will be relocated to the Shepparton Motor Museum, where they will be housed and used to form part of the Australian BMX Museum temporary exhibition which will be occurring from May 2019 until January 2020.

It is expected that the bikes will reappear in the CBD next year for the BMX Supercross World cup event.

Thanks to Greater Shepparton City Council and My Ride Shepparton, residents and visitors will have the chance to win a bike valued at $350 by simply snapping their photo alongside an Art Bike and posting it to social media. To be eligible to win, residents must tag @BMXAustralia and include the hashtags #VisitShepparton #Artbikes #ManyGreatThings.