Skatepark and BMX circuit on track for summer opening 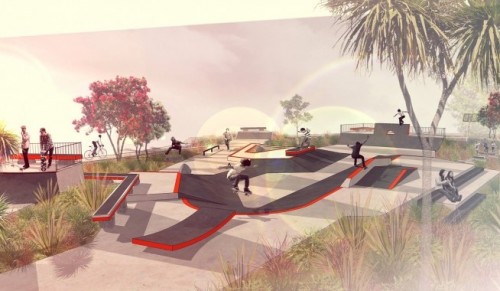 Two action packed features of the redevelopment of Auckland’s Waterview Reserve are rapidly taking shape and are on track for a summer opening.

A new skatepark and BMX Track are being built along with the hugely popular playground as part of the NZ Transport Agency’s Waterview Connection project.

Transport Agency’s Auckland Highway Manager Brett Gliddon explains “the local community will be spoilt for recreational choice when these two action sports facilities open for people to use for skating and biking this summer.

"The skatepark and BMX track are world class facilities for people of all ages and abilities to enjoy and it will be great to see young skaters and riders developing their skills here."

The facilities have been designed and built by the Well-Connected Alliance (WCA) with input from local skaters and BMX riders.

The BMX Track design was inspired in part by a similar track in Melbourne and features a series of consecutive jumps in a pump track style loop.

Construction of the skatepark and BMX track will complete the second stage of the Waterview Reserve redevelopment. The playground opened last year with around a thousand people attending the opening celebration.

The third and final stage is the enhancement of a heritage area around nearby Te Auaunga Awa - Oakley Creek which includes improvements to paths in the reserve, and includes landscaping and planting. This area will be open to the public to explore in early 2017.

The skatepark features items for beginners to advanced skateboarders.