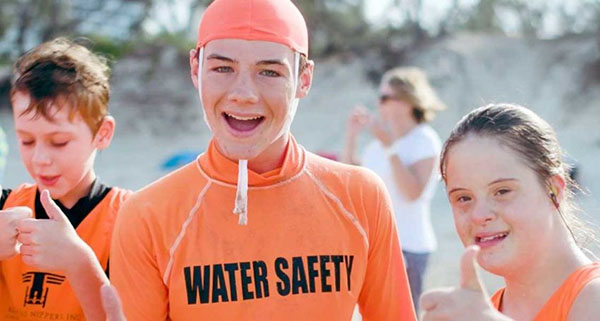 While many surf lifesaving clubs across Australia run separate programs for children with special needs, Gold Coast’s Nobbys Beach Surf Club is running an inspirational Albatross Nippers program directly alongside the standard Nippers program thereby providing a fully inclusive experience for all the children and their families.

Founded by sports and musculoskeletal physiotherapist and Adjunct Assistant Professor Nick Marshall in 2015, the Albatross Nippers program has made some serious waves in the community, with surf clubs and sporting associations across Australia adopting a similarly inclusive model.

Marshall says the value of the inclusive nature of the program can’t be underestimated, with essential peer relationships, communication and social skills, and general development all a critical part of Australia’s iconic Surf Life Saving Nippers program.

The Albatross Nippers program is also the subject of Included, a documentary that has been picked up by Virgin Australia for screening on flights into the Gold Coast.

Marshall, who in addition to running the program has also liaised with City of Gold Coast around beach matting and free beach wheelchair access, was named Queensland’s Local Hero at the Queensland Australian of the Year Awards in Brisbane earlier this year, an honour he didn’t expect.

Marshall commented “it’s really humbling, and I’m incredibly grateful for the people who made it happen.

“But all this stuff is about the program, I’m just the lucky guy who gets patted on the back.

“My real drive is that the program doesn’t need me. Hopefully, I can show people in other clubs you can easily set up your own club, there’s no need to involve me or to create some crazy empire, I’m just trying to show people that this is all you need.”

Warwick Hay, father of foundation Albatross Nipper Marcus, and a lifesaver himself, agrees saying “there are so many parts to it. It gets us down the beach and he has a lot of fun in the ocean and the networking – there’s so many great people from all sorts of surf clubs who come and help and they’ve become a huge part of life. Marcus could be at any beach and one of the lifeguards will know him.

“And of course the kids are learning skills and getting fit and healthy.”

And it’s not just fantastic for the children.

Hay continues “I see a lot of parents come down and they’re clearly doing it pretty tough.

“They take their shoes off, and they walk down and you take the kids off them, and mum and dad actually get to stand on the beach with a coffee, it’s nice to see some of those parents to get an hour off.”

With all the publicity that Albatross Nippers has been getting, Marshall says many surf clubs have been in contact to discuss the logistics of setting up their own inclusive programs.

Marshall adds that Gold Coast clubs Coolangatta, Tallebudgera and Southport are all well on their way to having similar programs.

Seeing the momentum that is gathering and the way the Surfing Life Saving and the wider community has already embraced the idea, Marshall is hopeful that things will happen much faster than the 50 years mentioned in the Included video.

Marshall concludes “we’re in that intermediate stage now where there’s a few clubs doing it, and over the next decade or so, I hope all clubs will have some kind of program.”