Australian middle distance running legend and former City of Gold Coast Mayor Ron Clarke has been commemorated with the headquarters building of the Gold Coast 2018 Commonwealth Games Corporation (GOLDOC) being named after him.

A recent function on the running track entrance to the GOLDOC building set out to recognise Clarke’s lifetime contribution to sport, his civic contributions and business career and his role in the successful bid for the Gold Coast 2018 Commonwealth Games (GC2018).

In addition to the headquarters being named in honour of the Olympic medallist a gallery of photos from his career and personal life has been installed along the building's entry walkway.

Clarke, who died after a short illness in June 2015, was instrumental in securing the 2018 Commonwealth Games for the city.

"Having this GOLDOC Headquarters here named in his honour and a little bit of a tribute in some of the images here at the entry way is an absolutely fitting tribute."

Sadly, the commemoration for Clarke was downplayed from an original plan to rename the Carrara Sports Precinct after the late legend. 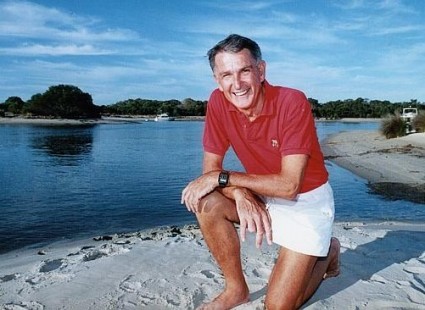 Despite his leading role in establishing both the Gold Coast Suns and state-of-the-art stadium they call home, the city’s AFL team and Stadiums Queensland scuttled hopes of renaming the precinct for Clarke.

Stadiums Queensland reportedly told the Council it had “commercial arrangements” with the AFL and Gold Coast Suns that would potentially be jeopardised by naming the Carrara precinct after Clarke.

Images: The recently renamed GOLDOC headquarters (top) and Ron Clarke at the time of the opening of the Couran Cove Resort (below).