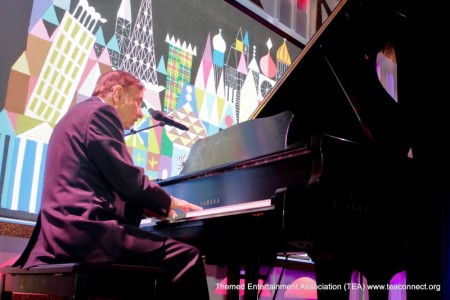 Presented during the three-day TEA Summit in Anaheim, the previously-announced Awards rewarded excellence for the creation of compelling educational, historical and entertainment projects across 17 categories.

Notable among the awards was the presentation of the Thea Classic award for 2015 to Disney’s ‘It’s a Small World’, with original composer Richard Sherman giving a special performance of the children’s classic on stage.

Created for the 1964 New York World’s Fair as a benefit for UNICEF, ‘It’s a Small World’ entertained more than 10 million visitors before being moved to Disneyland two years later, where it has entertained hundreds of millions of visitors since. Versions of the themed boat ride now also appear at Disney parks in Orlando, Florida; Tokyo, Japan; Paris, France and Hong Kong, where they are consistently among most visited attractions.

Asian attractions including Singapore’s Sentosa Island, Chimelong Ocean Kingdom in China and the The StoryGarden at The Amorepacific Beauty Campus in South Korea and were recognised with Thea Awards for Outstanding Achievement while the Wizarding World of Harry Potter at Universal Studios Florida was a multiple award winner.

Award winners (including their citations) were:

• Bistrot Chez Remy, Walt Disney Studios Park (Disneyland Paris) - AOA, Themed Restaurant
"...a family restaurant built by Remy and his friends, so that guests are rat-sized when they enter and dine"

• The StoryGarden at The Amorepacific Beauty Campus (Gyeonggi-do, South Korea) - AOA, Corporate Brand-Land
"...delivers on the essence of Amorepacific’s brand while also delivering a distinctive experience"

The Thea Awards’ naming is a play on three words: the first is ‘Thea’, the Greek goddess from whom all light emanates. Thea was the mother of Helios (the sun), Eos (the dawn), and Selene (the moon). The second key word is ‘Theatre”, a word derived from the goddess Thea. The third word, links to the TEA, the host association for the awards.

For more information go to www.teaconnect.org