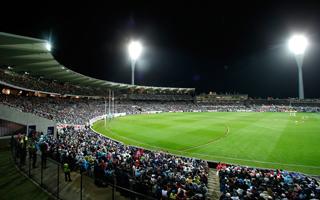 After 60 years, the match was the first ever night game that the Geelong Football Club has played at its home ground with all of the Clubs previous 623 home games at the venue being held during daylight hours.

The 73 metre high towers, with more than 100 light fittings, now provide broadcast quality lighting not only for AFL football bu also for other sporting and community events at the stadium including cricket, football, rugby league and rugby union.

Funding for the lights was through a $10 million contribution from the Australian Government's Regional Development Australia Fund (RDAF) and forms part of a $35 million redevelopment of the Simonds Stadium's southern stand to increase its capacity to at least 33,500 as well as providing much-needed amenity upgrades.

The Waypoint consultancy was responsible for putting together the successful RDAF application, as well as acting as Geelong Football Club's representative throughout the project.

Image courtesy of the Geelong Cats.