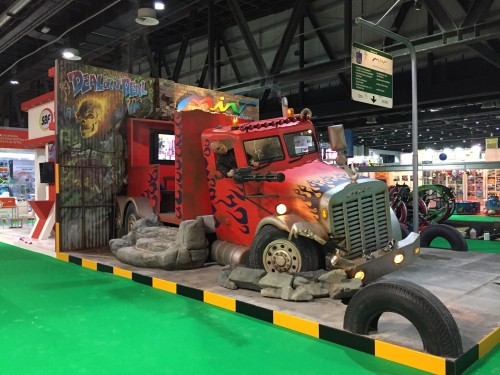 The organisers of this year’s Dubai Entertainment and Amusement Leisure (DEAL) Expo have revealed that exhibitors at the event signed contracts worth over US$1.66 billion.

With more than 300 global exhibitors, an increase of 30% on the previous year, and thousands of trade visitors, organisers International Expo Consults (IEC) were delighted that DEAL exhibitors signed contracts for innovative products and projects, amusement rides and other installations and services that will be rolled out during the course of the coming year.

Welcoming the success of the 23rd edition of DEAL, IEC Chairman Abdul Rahman Falaknaz stated “we are extremely delighted that majority of our exhibitors have signed significant contracts during the show.

“Many meetings and business contacts have been created and developed as exhibitors reached out to several visitors and trade partners at the show.

“There has been a renewed zest in the industry and we are sure that the region will be witnessing state-of-the-art family entertainment centres (FEC) due to the ingenious products that were showcased at DEAL. Theme parks in this region have also been growing on an upward spiral with innovate concepts showcased at this show to attract footfalls from residents and tourists alike.”

With tourism contributing to the 8.5% of its GDP by the end of 2016, the United Arab Emirates is continuing to invest in infrastructure projects to welcome more and more visitors.

In addition, Dubai Expo 2020 is expected to bring 25 million visitors, 70% of whom will come from outside the UAE.

IEC Chief Executive Sharif Rahman sees that it is imperative for shows like DEAL to be conducted and attract stakeholders across the region and the globe.

“2017 looks promising for our industry as most amusement operations have registered a growth in revenue and footfall year on year.”

DEAL has shaped the region’s entertainment industry for the past two decades, bringing together leading developments and regional innovations.

With the global theme park and amusement market projected to generate revenues of almost AED118 billion (US$32 billion) this year, the UAE, Saudi Arabia, Qatar and Oman and the wider Arabian Gulf region is set to witness a remarkable growth in the entertainment sector in the near future.

The growth of the amusment and leisure industry necessitates the need for shows like DEAL in the region.

Apart from bringing attention to several innovations, DEAL 2017 showcased cutting-edge inventions like the much-anticipated - augmented reality games, 9D park rides, 12D cinemas, family entertainment centre equipment, among the endless array of ingenious modernisations presented. In 2018, the event will be held from 8th to 10th April at Zabeel Halls 1, 2 and 3 at the World Trade Centre, Dubai.

Images: FECs and other leisure concepts are starting to drive the retail sector in the UAE.

19th December 2016 - FAMILY ENTERTAINMENT CENTRES TO THRIVE IN THE UAE