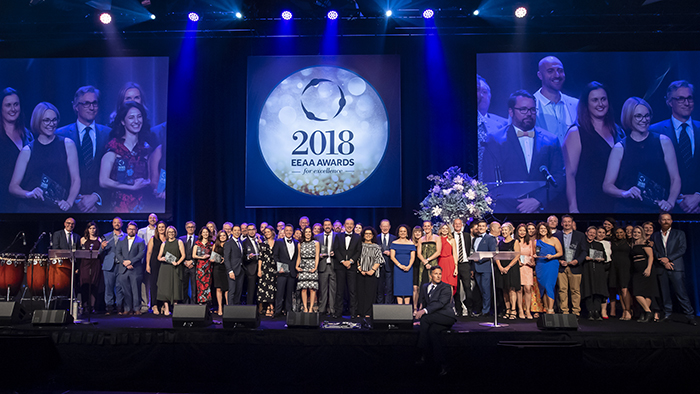 At its 26th gala event, held at ICC Sydney’s Grand Ballroom, the Association’s community celebrated the important role of individuals to the success of the Association and the wider business event industry.

EEAA Chief Executive, Joyce DiMascio, commended the judges for their decision to choose two outstanding winners for the Unsung Hero Award as both individuals were quiet achievers dedicated to their customers, staff and the industry.

“Mark Magennis and Stephen Steenson are widely respected for their passion and competency – both help others to shine through their wise counsel and support.”

Mark Magennis has dedicated his 25 year career to building a small business into a highly successful big employer of 80 full-time and 30 casual staff. He has achieved this with his partner, Peter Fulton, the company’s creative director. Mark has been at the helm since 2002, working initially from his small apartment. The Decorative Events & Exhibitions premises now spans 6,600metres2 of warehouse and showroom facilities in Mascot, Sydney. He was nominated for the award by his staff who believes he is an exemplary, inclusive and inspiring leader.

Stephen Steenson has worked with Reed Exhibitions since 2003 in operations and also in the show teams. He is the “go to” man for advice and guidance not only within Reed Exhibitions but in the wider industry. He played a key role in the industry during the closure of the Sydney Convention and Exhibition Centre and the relocation to Glebe Island and return to ICC Sydney running the first events in each and generously sharing his learnings.
Organisers look up to him and younger people are inspired by him and the Association can always count on him to contribute his knowledge for the greater good.

“We are immensely grateful to Tourism Australia for funding this opportunity and to Ungerboeck Software International for their continued support of the award category.” Ms DiMascio said.

Chair of Judges, John Trevillian AM said there were 35 judges, 9 were international and this ensured entries were assessed by those who work in a global context.

“Each of the categories was judged by three independent judges. We thank them all for their time and expertise and commitment to the industry,” he said.

Reed Exhibitions Australia took out this year’s Best Show Award for Play World Australia, a new to market show that targeted the children’s market and entered the Hall of Fame for Best Association Event with PAX Australia for Interactive Games & Entertainment Association after taking out the award for three consecutive years.

The Best Corporate Citizenship Award was won by the Melbourne Convention and Exhibition Centre for the Melbourne Renewable Energy Project which invests in the development of a regional wind farm from which the centre will generate enough power to run the new exhibition centre opened this year.

The gala dinner opened with two special videos – one from the Australian Prime Minister Scott Morrison and another from Kai Hattendorf, Chief Executive of the Global Association for the Exhibition Industry.

The Prime Minister acknowledged the importance of the exhibition industry in Australia.
“Our tourism, hospitality and expo industry are among the best in the world, indeed I say they lead and I pay tribute to what you do tonight. You’re world-class, you’re world’s best, you always make the most challenging events look easy. From trade shows to expos, your events make a real contribution to our economy, to jobs, trade and investment.” the Prime Minister said.

The Awards dinner was held in the Grand Ballroom at the International Convention Centre Sydney. The theming partner was Decorative Events & Exhibitions. The night was hosted by Colin Lane, with the show animation created by The Monkey’s Cobbler and entertainment provided by Veneno and Levi 5Star from Quality Control Entertainment. The registration Partner was Tradevent Solutions.

THE 2018 EEAA AWARDS FOR EXCELLENCE WINNERS ARE:
Commendations were awarded in some categories