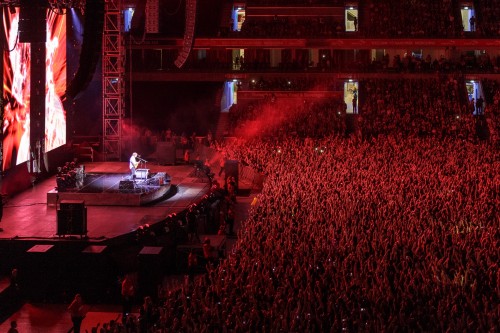 English singer-songwriter Ed Sheeran has set a new attendance record at AAMI Park in Melbourne, with 33,595 fans attending the second of his two shows last weekend.

Over two nights on 5th and 6th December, more than 67,500 patrons flocked to AAMI Park for Sheeran's solo acoustic performances – a remarkable figure that is made more impressive as his current concerts represent his second tour for 2015 (Sheeran sold-out three nights at Melbourne’s Rod Laver Arena in March).

The 33,595 fans in attendance on 6th December pipped the previous night’s mark of 33,602, with the consecutive record-breaking shows eclipsing AAMI Park's previous attendance record of 31,847 - set by Bruce Springsteen in February 2014.

While AAMI Park is predominantly a sporting venue, the stadium has displayed excellent flexibility in recent years by hosting large-scale concerts for the likes of Foo Fighters, Bruce Springsteen and now Ed Sheeran.

Global superstar Taylor Swift will add her name to the impressive roll-call this week when she brings The 1989 World Tour to AAMI Park on 10th, 11th and 12th December.