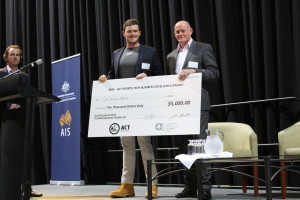 Canberra-based sports apparel brand OnTheGo Sports has had its business success acknowledged with the receipt of two awards: in the Exporting to Asia category at the ACT Exporter of the Year 2015 Award and with receipt of the ACT Government’s Sports Technologies Business Excellence Award.

Founded in 2011, OnTheGo was established to revolutionise the customized sports apparel industry and pioneer social impact in sport through its one4one® initiative.

Four years on and OnTheGo has enjoyed consistently strong growth, selling over 300,000 products in over 10 countries for, events, non-profits, health clubs or business.

People from elite IRONMAN to Sir Richard Branson use ONTHEGO products to engage in their activities.

Commenting on this success, OnTheGo Sports founder and Managing Director Mick Spencer states “this is a great achievement for the team, we’ve been working hard the past 12 months and the really exciting thing is we feel we’re only just getting started.

“It was a very competitive category, with some other amazing Canberra companies, Inland Trading Co, Wildbear Entertainment and IE Asia Pacific, so we’re so humbled by this award.”

Looking ahead, OnTheGo Sports is aiming to double its exports over the coming year with new contracts with Olympic teams for the Rio 2016 Olympics Games, fitness club chains and large enterprises.

It also has planes to establish a US-base in San Diego, California.

The event was backed by the ACT Government, the Australian Sports Commission (ASC) and PriceWaterhouse Coopers (PwC).