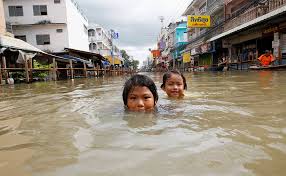 Recently released research shows that drowning is the biggest killer of children in Asia, with drowning rates up to 20 times higher than those in western countries.

The research, conducted over the last seven years, was spearheaded by UNICEF and The Alliance for Safe Children (TASC), working in partnership with local public health teams. Along with other 2004 research from China's Ministry of Health, it shows a huge number of drownings each year:

• In Thailand, 2,604 children under 18 died from drowning in 2004 (while other estimates suggest the figure is higher, as less than a quarter of Thai drownings are reported to hospitals).

• In China, at least 57,000 people of all ages perished by accidental drowning during 2004 (the World Health Organisation says the actual number of fatalities could have been as high as 112,000) with drowning the number one cause of death among under-15s).

The full story behind these sad statistics, and the Royal Life Saving Society of Australia (RLSSA)'s involvement in initiatives to reverse these trends, is told in the March/April 2008 issue of Australasian Leisure Management.

TASC Technical Director Dr. Michael Linnan is a keynote speaker at the 2008 Water Safety Conference to be held at the Crowne Plaza, Darling Harbour, Sydney on Thursday 15th and Friday 16th May 2008.

Details of the year's major event for the water safety community are available from the Australian Water Safety Council on 02 8217 3111, www.watersafety.com.au