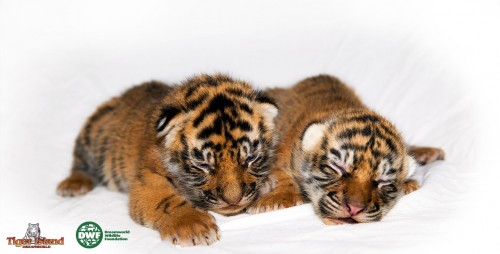 The cubs, born in later November, were unveiled to the Dreamworld visitors on Boxing Day.

Representing a another step in Dreamworld’s tiger conservation efforts, the sisters are the second litter born at Tiger Island this year to nine-year-old female tiger Nika and her 11-year-old beau Raja.

Their first son Kai was born at Tiger Island on 29th July.

Yet to be named, the cubs weighed 1.28kg and 1.12kg at birth and now weigh 3.02kg and 2.5kg. Veterinary checks have confirmed mother and her two daughters are well.

Dreamworld Chief Executive Craig Davidson said the cubs were a vital addition to the park’s interactive tiger program which actively contributes to saving tigers in the wild.

Davidson explained “Kai was the only cub in his litter so it’s great for him to have some playmates. I’m sure it will be like Tiger Island ‘kindergarten’ around here for a while.”

With less than 3,000 tigers left in the wild, tigers are critically endangered. Dreamworld through the Dreamworld Wildlife Foundation is the largest zoological contributor to tiger conservation in the world. 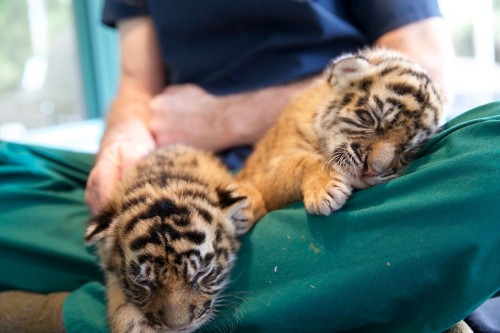 Mucci stated “Nika was transferred as part of the European Endangered Species Program (EEP) from a zoo in Poland to Dreamworld in 2012 for breeding purposes “We are very lucky she has found a suitable mate in Raja and has produced two sets of cubs.”

Tiger Island Manager Patrick Martin-Vegue said he was delighted with the progress of the sisters, adding “we’re doing daily health and weight checks on the cubs. They’re drinking 350ml of milk and putting on almost 100 grams a day which is a great sign.”

Dreamworld guests can see the cubs and Kai daily at Tiger Island with VIP Tiger Cub Experiences with Kai still available. The new cubs will join the program in late January.

Tiger fans can adopt the cubs, Kai and Dreamworld’s other tigers through the park’s Adopt-an-Animal program (available online and in-park) which raises funds to help save tigers in the wild through the Dreamworld Wildlife Foundation (DWF).

Celebrating its 20th anniversary this year, Tiger Island is now home to 10 adult tigers and three cubs. Dreamworld is an active member of the Zoo and Aquarium Association, the peak body representing the zoo and aquarium community throughout Australasia.