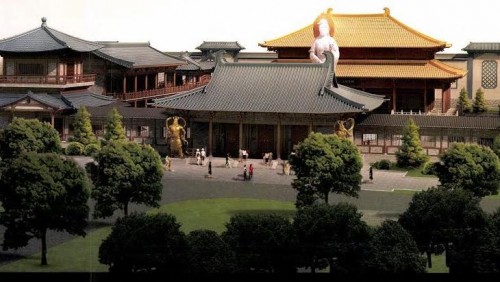 Massively scaled-down plans for the first stage of a controversial Chinese-themed cultural park at Warnervale on the NSW Central Coast have been submitted to the Central Coast Council.

Submitted last week, the development application is for stage one of the planned attraction, a Buddhist temple, at an estimated cost of $20.1 million instead of the original planned $83 million.

The Chappypie China Time project, being developed by ACTP, and once estimated at $500 million, has been variously described as a theme park, cultural park and ‘Chinese Disneyland’.

Developers had initially boasted the attraction would open this year but it has been beset by controversy, non-payment and delays.

Earlier this year the developers failed to pay the former Wyong Council the $10 million it had agreed to pay for the 15-hectare site on time.

At the time it had only paid about $100,000 in surety for the site, while documents released under freedom-of-information showed ACTP had secured the deal with only a $10,000 payment.

Former Wyong Mayor Doug Eaton, a major supporter of the project, used his numbers on council to vote to back the project.

To date $9.4 million of the purchase price is understood to be still outstanding with the Central Coast Council advising that, as of Monday, it had so far received $600,000 in deposits.

Fairfax media had previously revealed the Mayor's wife to be a shareholder in the theme park developer's ultimate holding company with Mayor Doug Eaton saying “he had no idea how his wife,  ... came to acquire the 10,000 shares”.

He suggested that they had been vested in her without her payment or knowledge.

ACTP has also used Chinese social networking service, WeChat, to apparently offer any potential major investors prepared to commit in excess of $1 million to the project the promise of a guaranteed Australian visa.

The company was instructed to remove an official NSW Government logo from its advertisements on the social networking website after it was found to have used them without proper authorisation.

There has been considerable speculation that China Theme Park’s ultimate aim is to rezone the land for a Chinese-investor based housing development – given the site’s proximity to the Pacific Motorway between Sydney and Newcastle.

One of the main opponents of the controversial theme park said the new DA should not be considered until ACTP had paid the Council the full $10 million for the land.

Former Wyong Councillor Bob Graham told the Express Advocate “the ratepayers of the Central Coast aren’t money lenders, and shouldn’t be treated as such.”

“It’s time to pull the plug on the whole project.”