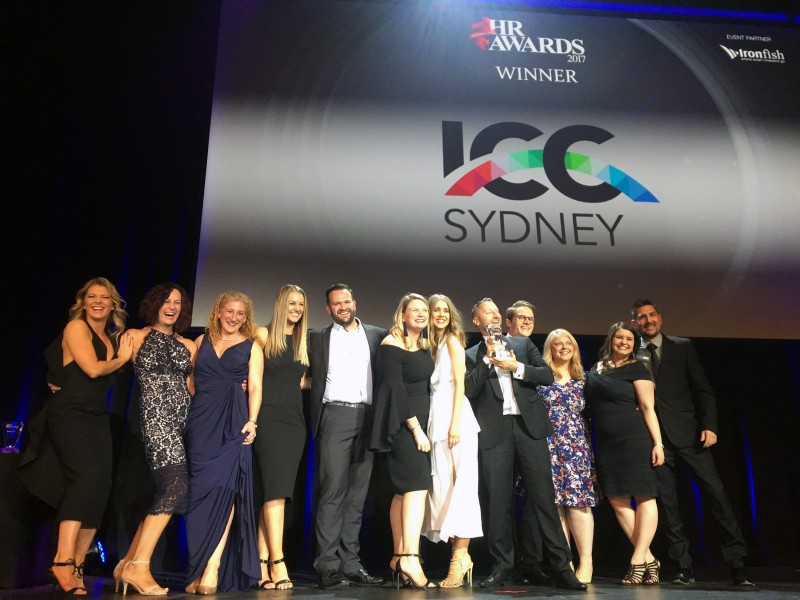 ICC Sydney has been recognised for its culture and outstanding work in recruiting and on-boarding almost 1,800 team members in time for its December 2016 opening, with the new venue taking out two major awards at the prestigious Australian HR Awards last Friday evening.

ICC Sydney Director of HR, Mathew Paine, said the wins across both Australian HR Team of the Year and Best Recruitment Campaign were testament to the inclusive culture that the entire organisation lives up to.

Paine explained “the HR Team proudly accepted these awards on behalf of ICC Sydney, however our success is definitely shared. While we are responsible for supporting and implementing skills development and engagement programs for ICC Sydney, the culture that we enjoy is a result of our entire leadership team and our vision to be an employer of choice.”

The ICC Sydney HR Team was responsible for securing and inducting 300 full time and almost 1,500 casual staff in an extremely tight labour market and is experiencing solid retention rates.

Using new technology to streamline the process, the team saved 10,000 hours in productivity and $125,000 in wages to review the 44,000 applications that were driven by a targeted multi-channel advertising and public relations campaign.

New starters are supported via an internal learning academy titled The Academy of Extraordinary, which includes internal programs and acknowledgement of effort as well as accredited training delivered in partnership with TAFE NSW.

ICC Sydney Chief Executive Geoff Donaghy explained his pride at the exceptional achievements of his team, stating “Mathew and his team are active throughout the organisation and the broader industry, ensuring our people receive the very best support so that each and every team member is prepared to reach their potential to deliver extraordinary experiences for our clients and have a great time while doing it.”

Along with a strong training and development focus, ICC Sydney has embedded diversity and inclusivity within its operations, believing this is key to creating a workplace where different perspectives support innovation, collaboration and overall productivity. As such, the venue’s diversity strategy is focussed on five Diversity & Inclusion streams; Aboriginal & Torres Strait Islander, Disability, Parents & Carers, LGBTI (lesbian, gay, bisexual, transgender and intersex) and Generation Success (Youth & Mature Aged workers).

The two award wins represent the latest in a string of accolades showcasing Australia’s premier convention, exhibition and entertainment venue as a beacon of excellence and innovation.