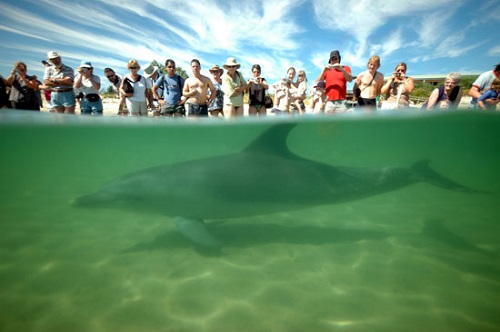 Opened by Western Australia's Tourism Minister Liz Constable, the new pool demonstrates some of the great marine diversity available in the region.

As Dr Constable explained, "the pool's opening comes just in time for the start of the dolphin season next week.

"Visitors can learn about a range of sea creatures as well as 100 or so dolphins that live in the waters off Koombana Bay."

The Minister also saw plans for the $4.8million expansion, scheduled to start late next year, going on to comment "the Dolphin Discovery Centre has become a premier eco-tourism attraction in the South-West, attracting 60,000 visitors each year (and) it is imperative to continue to deliver world-class attractions in this highly competitive market.

"It's the only dolphin-based attraction in Australia that delivers all four levels of dolphin experience: interpretation, swim encounters, shore-based interaction and boat watching tours."

Dolphin Discovery Centre Chairman David Trench said the 'Discovery Pool' was the first step in a series of new attractions for the centre over the coming years, explaining that "there are some exciting times ahead for the centre which prides itself on being at the forefront of marine and eco-tourism while also educating our visitors.

"The centre also conducts valuable dolphin research integral to the preservation and conservation of these creatures.

"The redevelopment will include more great attractions and facilities, enhancing the centre's tourism potential and long-term future."

The Dolphin Discovery Centre is a non-profit organisation committed to dolphin research, education, conservation and tourism. The Centre was opened in 1994, and is the first Centre in Australia dedicated entirely to dolphin research.

For more information go to dolphins.mysouthwest.com.au/