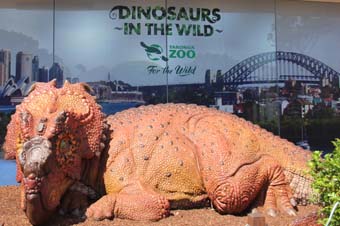 16 life-sized animatronic dinosaurs have come to life at Sydney's Taronga Zoo, giving guests a unique opportunity to learn about both palaeontology and contemporay wildlife.

The Australian Muttaburrasaurus, a Stegosaurus and a Tyrannosaurus Rex are now located along the Zoo's Dinosaur Trail as part of the temporary 'Dinosaurs in the Wild' exhibition.

Dinosaurs in the Wild tells an important story about extinction and adaptation, all the while drawing parallels to threats faced by animals today such as the Southern Cassowary, the Tasmanian Devil and the Asian Elephant. 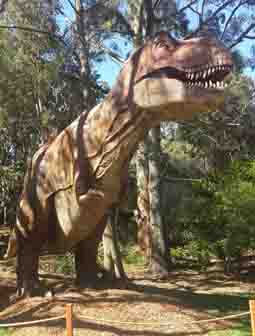 Taronga Zoo’s General Manager, Marketing Fundraising and Commercial Services, Paul Davies explains “many of Taronga’s animals are currently threatened in the wild by human activities, in some cases to the brink of extinction."

The dinosaurs will move, roar, growl and spit throughout the Zoo from 31st October until 1st February, 2015.