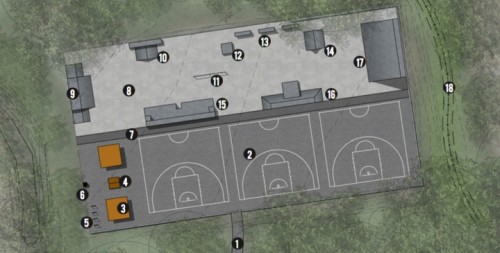 Designs for a temporary skate park in the Adelaide Park Lands have been revealed, but skaters say it’s too little, too late.

The South Australian Government is to provide three quarters of the funding towards a $490,000 temporary skate park in the east of the Adelaide Park Lands, but it has not announced funding for a permanent facility to replace the city skate park on North Terrace since that was closed earlier this year.

SASSA spokesperson, skater Andy Walker, who was involved in the design of the park, told InDaily that young people in Adelaide had been without a city skatepark for too long, and that a permanent, state-of-the-art facility was urgently needed.

Walker stated “we don’t know how long ‘temporary’ is?

“We’ve just taken a lot of good obstacles from other skate parks that we’ve seen and tried to put the best bits into one.

“It’s only meant to be a temporary space, so everything’s going to have to be transportable.”

South Australian Deputy Premier John Rau said the State Government was “committed to installing a temporary skate park while the final location for a new permanent park is determined”.

However, Walker said the people who previously used the former city skate park facility would have numbered in their thousands, including BMX riders, skaters and younger kids on scooters.

Since the closure of the facility “there’s been a bit of a slowdown in the scene … and I think it’s probably meaning that some kids aren’t being as active”.

Walker said a permanent city facility should ideally be located on the banks of the River Torrens.