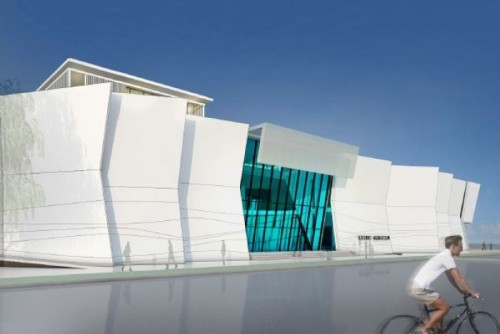 Major construction has begun on the new $50 million Cairns Aquarium which, when complete, will be the second largest publicly accessible aquarium in Australia.

Located in the heart of Cairns, the three-storey,10,000 metre² development will be home to more than 5,000 animals endemic to Australia’s Great Barrier Reef and surrounding rainforests.

Designed by Peddle Thorp Architects in association with Architects Ellick and Partners, the project has suffered a number of delays but is now scheduled for completion in early 2017, with doors and exhibits open to visitors in April 2017.

Speaking to the ABC, Leipnik stressed that the attraction will feature creatures that are endemic to this region explaining that all of the 15,000 individual fish and aquatic animals that will inhabit the aquarium have been locally sourced.

Leipnik stated “we've made a really key point of having only creatures that are endemic to this region.

"There's no penguins from Antarctica, there's no African cychlids, there's no cold water species; everything is about giving visitors a real feel for the biodiversity that's in this region."

Among the animals residing in the aquarium, will be a number of highly endangered species that Leipnik hoped could be bred in captivity and reintroduced to the wild to bolster populations.

Leipnik added “things like golden-sleepy cod - there's only 100 of them left in the wild - are on the complete verge of extinction.

"Also things like freshwater sawfish, which are also incredibly endangered and northern Australia has the last remaining stock of those in the wild.

"And then some really rare and bizarre things like ribboned pipefish, which are a wet tropics version of the weedy sea dragon."