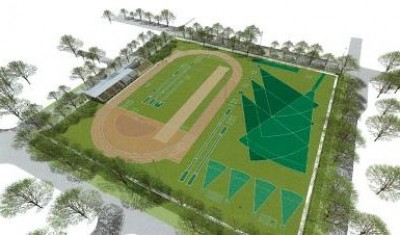 The construction of the Barden Park Regional Centre of Excellence for Athletics in Dubbo, central western NSW, is now underway.

The development, which will include a 500-seat undercover grandstand and the region's first international-standard synthetic track are set to be operational by June 2014, having received more that $3.47 million in funding from Round 2 of the Australian Government's Regional Development Australia Fund (RDAF). The NSW Government also commited by a $1.175 million to the project.

Once complete, Dubbo City Council along with partners Athletics NSW and Little Athletics NSW, aim for the venue to host regional athletics championship events as well as being the employment base for an athletics development officer among a staff complement of 14.

Council Parks and Landcare Services Director Murray Wood told local media that the athletics development officer will both facilitate events at Barden Park as well as going out into western NSW to encourage young people to try the sport. Talent discovered could then be nurtured at Dubbo rather than Sydney or Newcastle.

Wood stated "we have the ability to grow athletes from very junior participation to someone like Payton Smede, a medal-winning athlete at the national level."

Minister for Regional Development Sharon Bird recently got the development underway, stating "I'm pleased to be able to turn the first sod on this project which will support our young sports stars.

"Around 11,000 school students will use this facility and events already planned will bring an additional 2,000 athletes to Dubbo in the first year of operation.

"This is a facility that will be of international standard and able to host provincial and national level championships and training. It also has the capacity to run development camps for athletes and coaches."

While in Dubbo, Minister Bird also officially opened the renovated kitchen and function room at the Dubbo Regional Theatre and Convention Centre, completed with a $1.2 million grant from the Federal Government.

Image: Plans for the Barden Park Regional Centre of Excellence for Athletics.