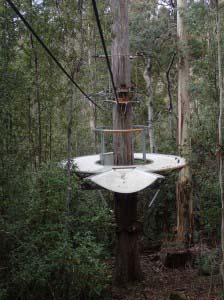 Environmentalists fear a proposed eco-tourism development in the Sunshine Coast hinterland will damage one of the region's last rainforest habitats.

The Queensland Government plans to develop a zip line canopy experience in the Obi Obi Gorge in the spectacular Kondalilla National Park, appointing Tasmanian company Australian Zip Line Canopy Tours as the preferred proponent for the project in May.

While moving to develop the next stage of the project, which has been predicted as having the potential to attract up to 40,000 extra visitors a year, conservationists have expressed fears that the development could harm one of the few pockets of remnant rainforest in the region.

Zip line tours, which involve taking tourists up into the forest canopy to travel between elevated platforms along steel cables known as zip lines, have grown in popularity in Australia in recent years, with similar projects operating in New South Wales, Victoria and Western Australia.

With the Obi Obi Gorge proposal, the original guidelines stipulated the zip line should not be visible from existing viewing points into Obi Obi Gorge. However, environmentalists remain concerned that the project would damage the sensitive Kondalilla National Park ecosystem.

National Parks Association of Queensland spokesperson Paul Donatiu told the ABC "it's hard to imagine a zip line not having a fairly major impact on the actual park itself, in particular Obi Obi Gorge."

Narelle McCarthy from the Sunshine Coast Environment Council criticised a lack of detail about the zip line from the Queensland Government and feels that the project is not a risk worth taking, adding "it just shouldn't be in a national park and the fact there's so little detail available makes it very difficult to really understand the extent of the impact."

In May, Queensland Tourism Minister Jann Stuckey said the zip line development would need to have a low impact on the rainforest and be sustainable, stating "in the next stage of the process, Australian Zip Line Canopy Tours will be required to demonstrate that environmental checks and balances are incorporated into the planning, design and operation of the zip line development, and show how the proposal will deliver economically for the community."

Shiralee Cooper from the Montville Chamber of Commerce said she was certain a zip line development would become a major attraction on the Sunshine Coast.

Cooper told the ABC "this will encourage a whole new demographic to come and enjoy and immerse themselves in the incredible habitat that we have here."

Christine Kardash from Hinterland Tourism said a zip line should not cause major damage to the surrounding rainforest, concluding "making a small amount very accessible with limited impact that I think the zip line will have is a great idea to open people's eyes."

The Queensland Government is expected to release the final proposal to the public in the first half of 2015.