A period of comment on draft plans by Western Australia’s Department of Parks and Wildlife (DPAW) to create two marine parks and a national park in and around the Kimberley's Horizontal Falls are set to close.

The area is on Dambimangari country and is of significant cultural value.

With iron ore and copper deposits, along with potential oil reserves in the area, the draft plan indicates no current mineral or petroleum developments in the proposed marine or national parks.

However, it provided detail of mineral exploration tenements which "overlay some areas in and/or around the proposed Lalang-garram/Horizontal Falls Marine Park and Oomeday National Park".

All three parks would be gazetted as class 'A' marine or national parks. 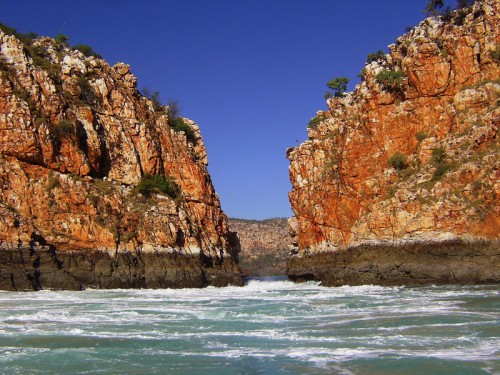 The proposal to protect the area from mining has been welcomed by the environment group Pew Charitable Trust.

Trust spokesperson Tim Nicol stated “it's really exciting to see another step towards protecting the Kimberley.

"Particularly the protection of the Horizontal Falls is showing that the Kimberley really is too precious to mine."

The Trust has previously welcomed the cancellation of plans for a proposed copper mine near the Horizontal Falls in 2012, and a decision by Rio Tinto and the Western Government in March 2015 to permanently ban mining on the Mitchell Plateau.

But Nicol said the Trust's campaign was not over yet, adding “we really welcome the inclusion of new sanctuaries in the marine park but we'll be looking very closely at the controls put on mining and commercial fishing in the marine park.

"Beyond (this draft plan) we'll be looking to the north Kimberley and other areas. The Kimberley is still threatened in many places by commercial fishing and by mining."