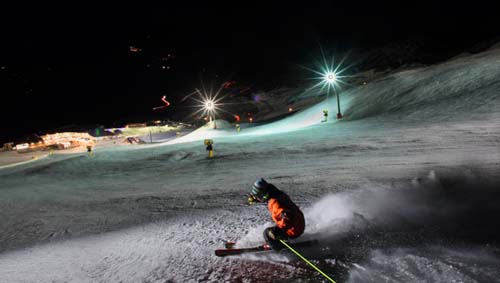 As Australia prepares to welcome the 2014 snow season, analysis of Government reports suggest that climate change could cut Australia's ski season by more than two months, reducing snow depths by 80 centimetres by 2050.

With Australia’s snow industry being worth $1.8 billion and employing 18,000 people such changes could have a dramatic impact on the alpine regions of south eastern Austalia.

In 2003, the CSIRO (Commonwealth Scientific and Industrial Research Organisation) released a report called The Impact of Climate Change on Snow Conditions in Mainland Australia.

In 2012, an update was written for Victoria's Department of Environment and Primary Industries – although the Victorian Government declined to release it.

However, the ABC’s Bush Telegraph obtained a copy of the update, Climate change impacts on snow in Victoria through Freedom of Information.

The report predicts that by 2050 the maximum snow depth could decrease by up to 80 centimetres and the ski season might shorten by up to 10 weeks.

Dr Jonas Bhend from the CSIRO Marine and Atmospheric Research was one of the authors of the report.

Dr Bhend told the ABC “the maximum snow depth [could] decrease by around 50% by 2050 in the higher elevation sites. Although in the lower elevation sites by 2050, the strongest emission scenario suggests the snow might be gone by then.

The latest report, coming 10 years after the original study, offers some valuable insights into the accuracy of earlier work.

The 2003 CSIRO report predicted the amount of snow machines would need to increase by 100% by 2020 in order to keep the industry profitable.

"It's something which guarantees people a holiday. 80% of skiers tend to stick to the beginner and intermediate slopes and it's these slopes which will continue to be snow made."

University of Canberra Associate Professor at the Centre for Tourism Research, Dr Tracey Dickson is studying the viability of alpine resorts and she says the stigma associated with snow making is now gone.

Dr Dickson explains “15 years ago you'd never see a resort talk about their snow making capabilities, it was an embarrassment. Now it's seen as a point of differentiation and a comparative advantage.”

However, Dr Jonas Bhend thinks the reliance on snow making is a short term fix at best, adding “if we are on a high emissions trajectory out to 2050 then even snow making is probably not going to cut the deal.”

Cheap airfares and a strong Australian dollar have lead many people to consider overseas destinations for their next ski holiday, countries like New Zealand and Japan where snow cover is more reliable.

Hackworth is worried that regular reports predicting shorter seasons and less snow will drive the ski dollar offshore, stating “it is a very real risk and I think the Australian resorts need to band together and push back.

“This is something which is going to take a genuine partnership between governments and private industry.

“The snow industry in Australia is worth $1.8 billion and employs 18,000 people. This is economic value and jobs that are not in capital cities but in regional Australia.

“The Snowy Mountains shire relies on the snow industry for 52% of its employment. If the industry and government sits idly by then you will see investment and jobs leak overseas.”

Hackworth doesn't see that Australia’s alpine resorts can attract enough year-round tourists to make up for the shorter snow seasons.

He adds “whether it's bushwalking, horse riding or cycling the reality is these are of relatively low yield and this means there won't be a lot of investment put into these activities.”

But Dr Tracey Dickson disagrees and thinks that Australia’s snow industry can learn from places where the off-season is as long as the dometic ski season.

Dr Dickson concludes “when you look at Canadian resorts with their mountain bike season they're particularly short. They have about a two month mountain biking season and they have some fantastic mountain biking opportunities.

“Whereas in Australia we have the reverse. We have a huge potential for growing something like mountain biking for six months of the year.”