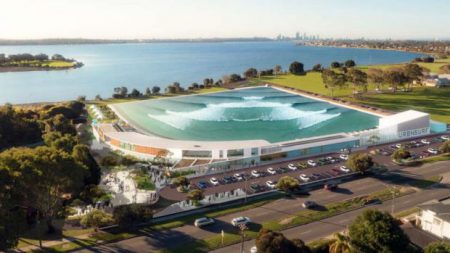 City of Melville Councillors have given their approval to progress the signing of a ground lease for the development of the planned URBNSURF Perth wave park facility at Alfred Cove on the banks of the Swan River.

Following a number of amendments and lengthy debate into the early hours of the morning at a Special Meeting, the Council last week directed the Chief Executive and Mayor to proceed with the execution of the ground lease agreement for the surf and recreation facility.

City of Melville Mayor Russell Aubrey welcomed the decision, stating “Councils decision to progress to execution of the lease is a significant step towards what will be a unique and transformative development both for the Melville community and for the State.

“From the beginning, there has been a lot of interest in this project from the community which was evident through the high number of submissions the City received with over 3000 in support and over 650 against, clearly showing there was wide spread support for this type of facility to be established in Perth.

“The City has worked through a long process guided clearly by the Local Government Act, allowing the project to be fully considered and measures put in place to ensure the appropriate assessment of risks and impacts will be conducted, as a condition of the lease.

“It is the responsibility of the City and Councillors to plan for the long term needs of the community and for Melville residents and ratepayers this project offers both social and economic benefits.”

“CEO Dr Shayne Silcox highlighted that for ratepayers in particular, the development would provide a financial opportunity to help keep rate increases as low as possible into the future.”

The Council cites that when operational, the wave park has the potential to deliver: 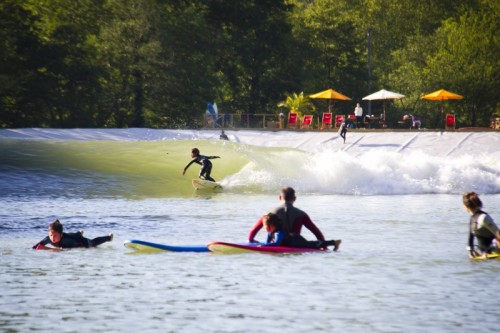 Dr Silcox added “one of the City’s priorities is to support a healthy and active community, and we are thrilled we will be able to deliver a new and additional sport to our community if the project goes ahead.

“A transformational project of this type is complex by nature and our Councillors and officers have worked through the issues to reach this milestone. It is now up to the Wave Park Group to meet the conditions of the lease over the next 12 to 18 months before the project can become a reality.”

Once signed, the lease requires developer the Wave Park Group to secure approvals from a large number of external agencies including the Western Australian Department of Parks and Wildlife.

Without those approvals, the project will not go ahead.

Prior to the Council vote a report in Perth newspaper The Sunday Times revealed that the Council’s Manager of Health and Lifestyle Services Todd Cahoon owned shares in Wave Park Group Pty Ltd until 22nd September last year.

The report suggested Cahoon was the officer responsible for the strategy to move Melville Bowling Club, which has freed up land on which Wave Park Group would build the wave park.

However, Cahoon told the newspaper that he disclosed his shareholding to his employer in mid-2013.

Cahoon advised “this was done directly to the CEO as well as through the regulatory requirement of completing an annual return as per the Local Government Act..

“When I became aware that Wave Park Group Pty Ltd were putting in a proposal within the City of Melville, I divested any interest I had in Wave Park Group so that there was no perceived conflict of interest.

“Due to disclosing interests I have had no involvement with the Wave Park proposal matter.”

Cahoon added “the bowls strategy, of which I have had involvement in, is a stand-alone project and has no bearing on whatever happens on the site where the Melville bowls club is - whether it’s a wave park or whether it’s something else.”

Cahoon stressed that there was no conflict of interest because he’s had no involvement in the wave park proposal.

Ross stated “there’s nothing else to this other than nimbyism.

“What we have is a group of entitled wealthy people trying to prevent an area of the river foreshore being used by the general community and preventing what’s going to be an amazing project for all of Perth just because they treat that area of land as an extension of their front lawns.

“It’s all just scaremongering. We have faced this now for months and months. I think the biggest story is how the hell all these anti groups got hold of all of the confidential information about our proposal that has only been presented to councillors behind closed doors. There has been a consistent and constant leak of information from a particular councillor or some councillors to the anti groups.

“The anti group has just tried to confuse everyone and usurp the process in an attempt to stop this project. That to me is really dishonest.”