Challenge Wanaka gears up for biggest race yet 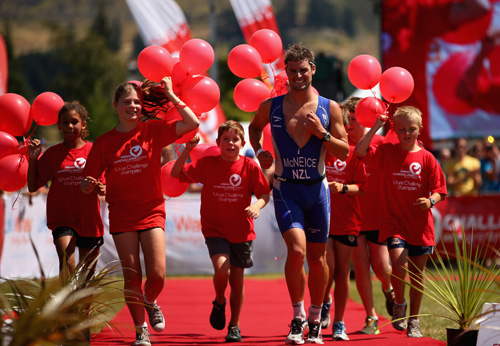 Saturday (19th January) will see the 2013 Challenge Wanaka host over 2,000 participants in the week-long triathlon festival that has attracted world champions, Olympians and a record 1,500 long course triathletes.

The highlight in the flagship Challenge Wanaka race on 19th January is the presence of four-times world champion, Chris 'Macca' McCormack, one of the sport's great athletes with over 200 victories to his name and his eye on a new course record at his first New Zealand long distance race. Determined to stop him in his tracks is a strong men's field that includes former Duathlon World Champion, Leon Griffin (AUS), Challenge Wanaka 2011 champion, Jamie Whyte (NZL) and four-times iron distance champion Bryan Rhodes (NZL).

The women's race will see an exciting dual between New Zealand's top two long course triathletes, Gina Crawford and Joanna Lawn. Crawford has won Challenge Wanaka four times and is going for a fifth, Lawn has won Ironman New Zealand seven time and has turned her sights to the tough, honest course of Wanaka for the first time. They are joined by Australian Kate Bevilaqua who has multiple long distance titles to her name, along with Kiwis Candice Hammond and Julia Grant, both of whom are regular podium finishers.

Challenge Wanaka has become renowned as a bucket-list race for triathletes from all over the world with its unique location on the edge of the TeWahipounamu World Heritage Area and Mt Aspiring National Park, earning the reputation of the world's most scenic long distance triathlon. Featuring a 3.8 kilometre swim in the crystal waters of Lake Wanaka, a 180km cycle through the foothills of the Southern Alps and a 42.2 off-road run, the course is as honest as it is spectacular.

Challenge Wanaka Triathlon Festival is the largest in New Zealand with over 2,000 athletes of all ages and abilities taking part during the week-long celebration of sport. The action started last Sunday (13th January) with the Puzzling World Junior Challenge Wanaka for children aged six to 15 years followed by the Radio Wanaka Charity Fun Run/Walk on Monday evening. Challenge Wanaka is part of the global Challenge Family series that features 18 events worldwide in Germany, France, Spain, Denmark, Holland, Austria, UK, Italy, Canada, Thailand and Taiwan as well as New Zealand.

For more information go to www.challenge-wanaka.com