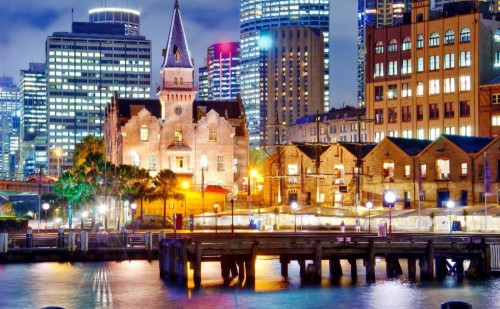 A new report is advocating for Sydney to develop a night-time economy, slamming the city being the most dull and lifeless of Australia’s state capitals.

Released by the Committee for Sydney, the report, Sydney As A 24-Hour City, makes a series of recommendations grouped in four areas: expanding the diversity of night-time activities; effective governance and regulation; an integrated approach to planning and transport and promoting Greater Sydney as a 24-hour city.

Focus on Greater Sydney, not just the harbourside CBD, the report suggests that “a successful night-time economy requires the coordination of multiple agencies and actors, effective planning and good governance and regulation.”

It recommends changing planning regulations so new developments near entertainment venues are built to accommodate noise from that venue and suggests a “neon grid” of night-time precincts connected by public transport.

It also advises “maximising the economic and social potential of the night-time economy is a key challenge for global cities.

“A number, most notably Amsterdam, Berlin, London and San Francisco, have arguably set the benchmark in terms of creating, investing in, and promoting vibrant and diverse 24-hour cities.

“Other Australian cities have also been proactive, not least Melbourne, in extending late night public transport, and Adelaide, in encouraging smaller bars and cafes in its CBD and Perth, where many retailers stay open until 9pm during the week.”

It also adds “diverse night-time activation creates a viable transition from day-time to night-time economies, and this economic diversity is critical to fostering a more inclusive and safe night-time environment and attracting a mixture of people. This mixture of users naturally creates a calmer environment on the streets and makes unsociable behaviour seem less acceptable.”

Recommendations from the Sydney As A 24-Hour City report are:

1. Expanding the diversity of night-time activities

• Arts and cultural institutions should build upon the success of Culture Up Late to offer late-night access on certain days, all year round.
• This could also include the development of a ‘First Thursdays’ style scheme in Greater Sydney for smaller galleries and museums to stay open until at least 9pm.
• Cultural institutions should consider collaborating to offer a discounted pass to visit a number of cultural institutions at night over a weekly or monthly period.
• The property and arts and culture sectors should develop new partnerships to showcase temporary public exhibitions and activate underused land or buildings.
• In major urban centres, late-night shopping should be extended to Friday and Saturday. Councils should allow shops to open until at least 10pm without formal development approval.
• State government departments and councils should review opening hours of services such as libraries and gyms to assess demand for night-time services

• NSW Department for Premier and Cabinet should lead the development of a night-time economy strategy for Greater Sydney.
• NSW Government should introduce a coordinating figure to bring together different agencies and actors in the night-time economy. Options include a ‘Night Czar/Mayor’ or Minister for the Night-Time Economy.
• There should be ongoing evaluation by NSW Government into the impact of ‘relaxations’ of the lockout laws in Sydney’s night-time precinct following the recent law changes, prompted by the Callinan Review.
• NSW Government should examine the introduction of Amsterdam-style ‘planned districts’ for areas with dense and diverse night-time activities, such as Kings Cross. A voluntary, community-led approach, such as implemented in Newtown, is also a model worth considering.
• Businesses that are participants in the night-time economy should establish a Night-time Industries Association in NSW to drive coordination and collaboration and ensure that business has strong voice in this policy area.

3. An integrated approach to planning and transport

• Local Councils responsible for major night-time precincts should pilot ‘Night-time Business Improvement Districts’ as a genuine partnership between councils and local businesses involved in the 24-hour economy.
• Options for funding raised through Business Improvement Districts might include upgrading of CCTV networks where relevant, better lighting and streetscape upgrades.
• A Night Zone – Safer Transport Initiative should be piloted, potentially in Business Improvement Districts.
• Transport for NSW should work with councils to develop an integrated transport strategy for major night-time employment and entertainment precincts.
• In conjunction with the development of this strategy, TfNSW should pilot extra public transport services for major night-time precincts.
• The Commission supports the establishment of a neon grid, a series of identified entertainment precincts across the city, connected by an efficient and accessible late-night transportation system.
• Planning controls should be amended so that any new development with a residential component within 100 metres of an entertainment venue will have to assess the noise from that venue and design and build to manage the noise.
• Amend the SEPP Exempt and Complying Codes 2008 to allow for small scale arts venues as a temporary use under all zonings except Residential.

• NSW Government, in partnership with other agencies, should extend existing promotional guides to produce a guide to night-time activities, including a digital version, to market and promote Sydney to regional and international visitors.
• Councils across Greater Sydney could consider introducing a scheme similar to the ‘Purple Flag’ project in the UK, an accreditation process that allows members of the public to quickly identify town and city centres that offer an entertaining, diverse, safe and enjoyable night out.
• Councils should also work on cross boundary night-time economy strategies.
• NSW Government should work with councils and the Greater Sydney Commission, as well as relevant agencies, to develop an integrated wayfinding standard for Greater Sydney, with an appropriate focus on night-time activities

Click here to view the Sydney As A 24-Hour City report.