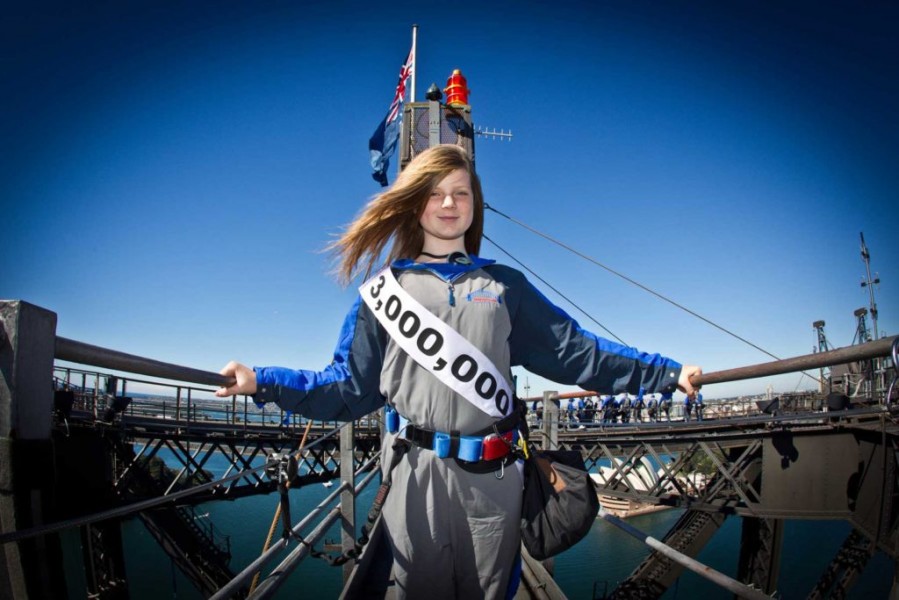 BridgeClimb Sydney has celebrated the three millionth climber to scale to the top of the Sydney Harbour Bridge.

At 10:15am on Monday 21st April 2013, Caitlin McWilliams, from Wellington, New Zealand, and her family climbed to the summit of the Bridge, 134 metres above sea level. 11 year old Caitlin is in Australia visiting during the school holidays, climbing the Bridge with her father, Mark McWilliams, and her older brother, Samuel.

Caitlain explained "I was really surprised when I found out. It's pretty cool to think three million people have climbed the Sydney Harbour Bridge before me.

"I've seen lots of people doing it, and I've always wanted to do it myself. I just loved the view from the top, and I thought the whole experience was pretty awesome."

BridgeClimb Sydney Chairman and Founder Paul Cave congratulated Caitlin on her achievement and gave her a gift to mark the occasion.

Cave stated "the BridgeClimb team is very excited to reach this historic milestone. We've always felt very privileged to welcome each and every climber from around Australia and the world who comes to experience climbing the Sydney Harbour Bridge, but of course number three million is perhaps that little bit extra special!

"Since BridgeClimb's inception, it's been essential that we continually deliver a unique experience to both our domestic and international customers. We now currently have four climbs on the Bridge, the most recent being the introduction of the Mandarin Climb. We look forward to welcoming many more climbers from all corners of the globe to summit the Bridge".

During 14 years of operation, BridgeClimb has seen three million climbers from over 137 countries, more than 4,000 engagements, and approximately 20 weddings on top of the Sydney Harbour Bridge.