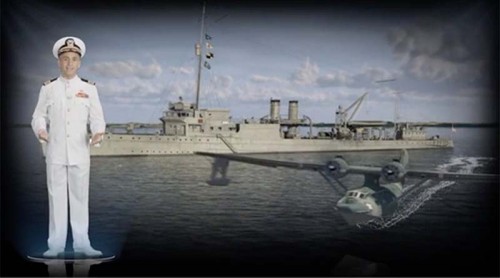 A new attraction that recreates and commemorates the Second World War bombing of Darwin has opened on the city's Stokes Hill Wharf.

The holographic technology tells the little known story of the commanding officer of the USS William B Preston, Etheridge (Jim) Grant, who observed the attack from the water after being blown from his tender trying to return to his ship.

Other highlights of the new attraction include a suspended full replica Mitsubishi Zero Japanese fighter plane and a window depicting Darwin Harbour in 1942 that comes to life giving visitors an experience of the Wharf during the attack.

This synchronises with a raised floor showing an aerial view of the harbour bombing, which moves when the Wharf is bombed.

Welcoming the new attraction, Tourism NT Chief Execuitve Tony Mayell stated “there is no doubt this fantastic new tourism attraction is world-class; some of the technology is so advanced it’s the first time it’s ever been used. 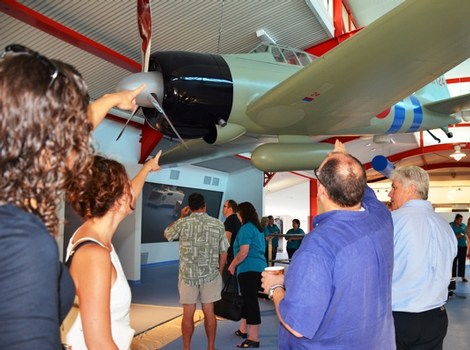 “Visitors will be transported back in time to Darwin on 19th February 1942 and experience what it was like on that fateful day during the Bombing of Darwin Harbour - the largest ever single attack mounted on Australia by a foreign power.

“With the launch of this new tourism attraction we are telling visitors around the world - If you want to learn more about Australia’s war history, the Northern Territory is the place to come.

“Military tourism is a growing trend with more and more people visiting war memorials, exhibitions and events in Australia and around the world.

“This new attraction will complement the range of other military experiences on offer in Darwin and establish the Northern Territory as a leader in Australia’s war history.”

To support the launch of the new attraction, Tourism NT is investing $225,000 in a new dedicated military tourism advertising campaign that will showcase the range of tours, attractions and historical sites on offer right across the Territory.