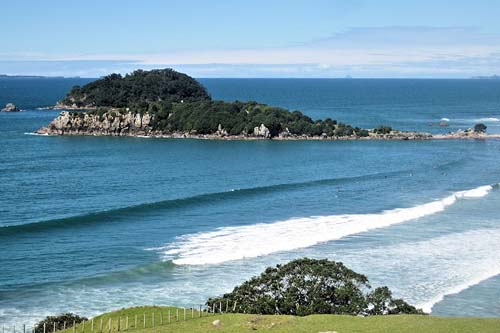 The Bay of Plenty Regional Council has decided that New Zealand's first artificial surf reef will be removed from Mount Maunganui.

The $1.5 million artificial reef, built from 2005 to 2008 with donations from the public and community funding groups, has never functioned as intended and had been widely criticised by surfers and the public. Surfers said the reef did not provide the intended surf breaks while surf lifesaving organisations were concerned that it was creating dangerous rips for swimmers.

Located 250 metres offshore, the reef structure was to have been part of on-going research into artificial reef development by the University of Waikato. However, the structure was never fully completed.

Backed by the Mount Maunganui Reef Trust, which obtained resource consent to build the reef in August 2000, the surf reef was designed by ASR Limited, a leading global advocate of the creation of artificial surf/multi purpose reef breaks. However, with ASR also experiencing difficulties with other reefs at Opunake in Taranaki and at Boscombe in the United Kingdom, the company went into liquidation in 2012.

The demise of ASR and the removal of the Mount Maunganui reef would seem to cast doubt over whether such projects will ever work as a surfing attraction.

With the five year consent term for the reef having lapsed in 2010, Bay of Plenty Regional Council, had been considering options for its future management.

Explaining the Council’s move, Deputy Chief Executive Eddie Grogan stated “the reef’s expected positive effects have not been realised (and) it’s also generated some unforeseen effects, including creating a large scour hole which affects waves and currents, increasing the frequency and intensity of rips which pose a serious risk to swimmers in the popular Tay Street area.

“We have commissioned a specialist report to consider the effects on the beach, swimmer safety, navigation safety, surfing values, cultural values and ecology. The review evaluated three options - status quo, removing the reef and repair and restoration, and recommended removal.”

The review recommended the reef structure be removed in a staged process. Removing the largest geotextile containers at a cost of about $60,000 would likely eliminate health and safety and environmental issues.

While the Reef Trust had told the Council it would like to see the reef completed to achieve its original intent, it was not in a financial position to maintain, manage, re-consent or complete it, Grogan added.