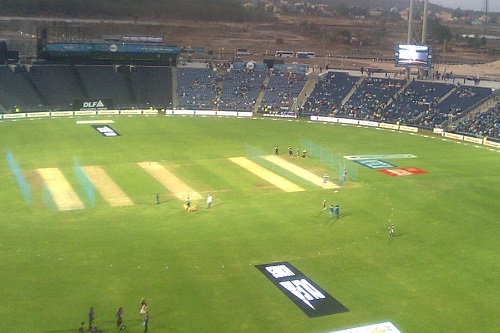 Following financial difficulties, the Maharashtra Cricket Association Stadium in the Indian city of Pune has been taken over by the Bank of Maharashtra.

According to Indian newspaper The Hindu, the MCA has failed to repay dues worth Rs69.53 crore US$9.5 million) to four banks, including Bank of Maharashtra. As a result the bank has assumed “symbolic possession” of the venue.

Despite losing control of the venue, MCA Secretary Riyaz Bagwan has moved to clarify that all matches will go ahead at the Stadium as normal. The venue has faced financial problems since a naming-rights deal with Sahara group was cancelled in 2012.

Bagwan told The Hindu on Monday of this week “today only I have got it clarified by the bank officials that the cricket activities will not be disrupted at all since it’s a notional possession. They have said they will not let any of Maharashtra’s matches or training sessions be hampered all through the season.”

The Hindu added that Bank of Maharashtra, Karnataka Bank, Bank of Baroda and Andhra Bank gave the MCA a 30-day notice to repay the debt on 18th August.

After this deadline passed, the banks, led by Bank of Maharashtra, assumed control of the venue.

The Stadium hosted the recent one-day international between India and the West Indies, along with the Ranji Trophy match between Maharashtra and Vidarbha.