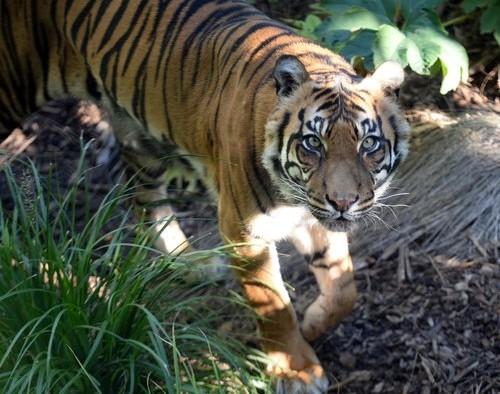 Australia's oldest Sumatran tiger has been euthanased by vets at Adelaide Zoo because of age-related conditions.

Kemiri, aged 22, has been treated for arthritis and kidney issues but had deteriorated over recent days.

"The average life expectancy for Sumatran tigers in the wild is about 12 years - and in captivity about 20 years - so to reach 22 is really positive."

Carnivore keeper Matt Daly said zoo staff had a deep affection for the tiger, adding "we were so lucky to have Kemiri with us for so long. She was playful and interactive with keepers throughout her years here at Adelaide Zoo and will be fondly remembered.

"She would greet her keepers in the morning with an affectionate chuff and lean in for scratches.

"Kemiri's biggest quirk was that she hated chicken - even a bucket that just had chicken in it before her normal red meat feed, she would turn her nose up at."

Kemiri was one of three Sumatran tigers at the zoo and came from Sydney's Taronga Zoo in the mid-1990s after being hand-reared there because her mother was not feeding her effectively.

Keepers think that is part of the reason she had such a special relationship with the zoo staff.

Zoos SA said it would now like to find another Sumatran tiger to join the remaining two in Adelaide.

Adelaide Zoo Chief Executive Elaine Bensted told the ABC "Tuan, our male, is also getting up in there in age and then Assiqua, our female, is not as old

"Yes, we will have those discussions with the species coordinator of Sumatran tigers in our region."

Conservationists say wild tiger populations remain in decline and there are fewer than 400 Sumatran tigers believed to be left in the wild.