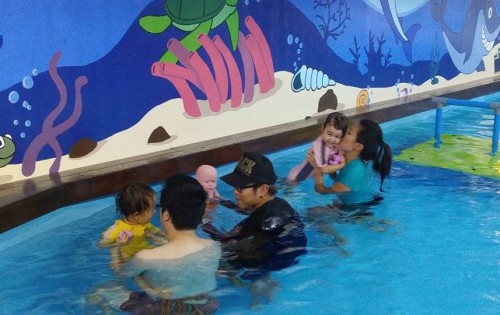 With the Queensland-based company set to open franchises in New Zealand, Brazil and the Philippines, it began operations in Singapore with JUMP! Swim Schools Bukit Timah becoming the 45th operational facility in its portfolio.

The Singapore opening comes just weeks after the swim school provider was named Emerging Franchisor of the Year at the Franchise Council of Australia’s Excellence in Franchising Awards in Canberra.

“Swimming is a confidence-based skill and our 44 operational sites in Australia comply with our unique competency-based curriculum that is dedicated purely to early-years learn to swim teaching.

“We see ourselves as the child carers of learn to swim. We have a low teacher on baby ratio and we are putting specialised education with metrics back into learn to swim and that relates to our success across the country.

“We are excited that children in Singapore will reap the benefits of this tailored, highlypersonalised program delivered in our fun and safe state-of-the-art swimming facility. It is the perfect environment for boosting the confidence in young swimmers.”

The Singapore site is in Bukit Timah, an affluent area in the Central Region of Singapore popular with expatriates.

JUMP! Swim Schools Bukit Timah franchisee Manli Gong said she had been inundated with hundreds of pre-enrolment enquiries since word got out of the award-winning, Australian-based specialty learn-to-swim centre’s opening.

Gong signed the first international franchise after visiting JUMP! Swim Schools Wanneroo during a recent visit to Australia with her husband David and their infant daughters.

Gong stated “the fun and friendly heated facility that is part of the JUMP! Swim Schools model impressed me.

“Every child deserves a nice environment to learn how to swim and they should be able to learn to swim all year around.”

JUMP! Swim Schools is Australia’s leader in infant swim instruction with 10,000 children learning the fun life skill across 44 trading locations. A further 50 are scheduled to open nationally within six months.