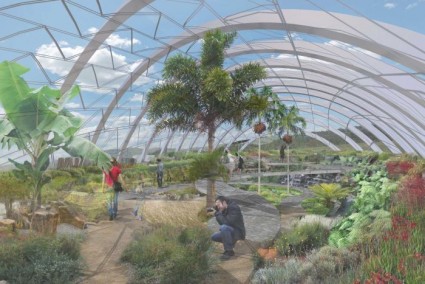 The Australian National Botanic Gardens (ANBG) has launched an ambitious plan to halt a slide in visitor numbers, which have fallen by about 20% over the past eight years.

The ANBG hopes to turn its fortunes around, appealing to younger people by building accommodation, play areas and new event facilities.

At the heart of a newly-released 20-year master plan is a proposal to build a massive tropical conservatory, alongside a new visitors' centre, cafe and amphitheatre which will host weddings and concerts.

Included were some more controversial suggestions - including building an eco-lodge catering for up to 120 people to attract more school groups.

In a significant departure from the gardens' emphasis on quiet contemplation of nature, the architects proposed construction of a ropes course and a nature play terrace for children.

The master plan revealed the ANBG was haemorrhaging visitors at the rate of 10,000 people a year, a figure that Director Dr Judy West says is worrying.

Dr West stated "it is a concern (but) it parallels almost every other national institution in Canberra.

"That's not a good thing, but it's really to do with demography and people moving around the country."

Dr West also admitted the gardens needed to be more visitor-friendly, including streamlining pathways and moving workshops away from public areas.

The initiatives were welcomed by Friends of the Australian National Botanic Gardens, the group of volunteers that works alongside paid gardens staff to fundraise and provide interpretive tours.

Jackman stated the master plan is "particularly aimed at children, (which) I think is a very good idea.

"It doesn't in any way detract from, but enhances, the overall role of the gardens - it doesn't affect the gardens running its core business of scientific research."

The master plan also proposed construction of a new "seed bank" as the current facility was nearing capacity.

The issue of financing the ambitious plan remains unresolved, with estimates the project could cost $25 million, a figure that is more than double the ANBG's annual budget. 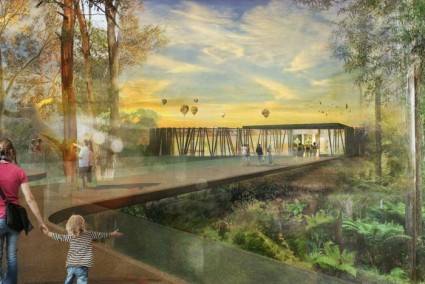 At the launch, Federal Parliamentary Secretary to the Minister for the Environment Bob Baldwin said the master plan offered a path to viability, initially suggesting the Federal Government would fund the entire cost.

"We want to spend $25 million over 20 years to make sure this project achieves its maximum potential."

Dr West later clarified the Commonwealth had so far only committed $5 million, not the full $25 million required, saying she would lobby them for more capital funding.

She said much of the money would likely come through private sponsorship and fundraising.