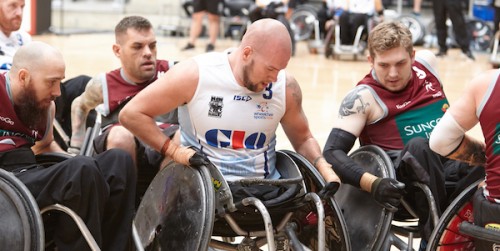 Announcing the hosting during the opening ceremony of the 2016 GIO Fierce 4 Wheelchair Rugby Nationals in Sydney last week, IWRF President John Bishop stated “IWRF is excited to bring the Wheelchair Rugby World Championship to Australia for the first time.

“Australia is a strong competitor with a long history in our sport, having participated in every World Championship and Paralympic Games competition.

“Many of us have great memories of the Sydney 2000 Paralympic Games, and we look forward to coming back to the Sydney Olympic Park and the great sports fans of Australia.

“DSA put together an excellent bid and I am confident they will give us a fantastic World Championship.”

DSA Chief Executive Jenni Cole stated “the success of our bid is a milestone for Australian sport and comes with significant support from our partners the Australian Rugby Union and Australian Defence Force.

“We are delighted that the Championship will bring the world’s most elite Wheelchair Rugby competition to the Australian public - Wheelchair Rugby was one of the most popular sports during Sydney’s 2000 Paralympic Games.

“Since its inception in 1976, the sport of Wheelchair Rugby, previously known as ‘murder ball’ has showcased the fierce and competitive nature of sport for athletes with a disability and captivated viewers worldwide.”

Disability Sports Australia is the governing body for Wheelchair Rugby in Australia.